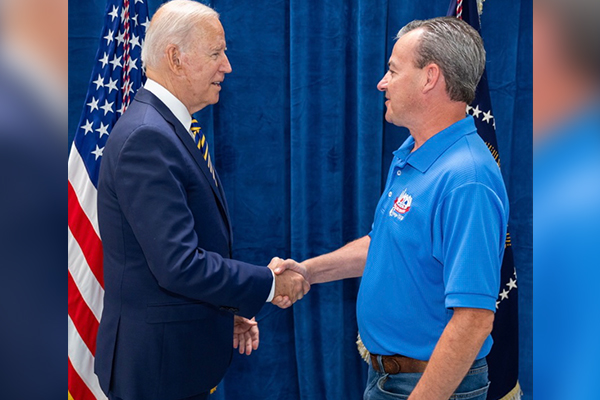 President Biden made a stop at the Mack Truck plant in Macungie, PA, recently to talk about his plan to strengthen Buy American rules.

During the speech, Biden told the audience of about 130 people that he would be making some of the biggest enforcement changes the Buy American plan had ever seen. No longer would it be good enough for the federal government to spend tax dollars on products made in the U.S.A. built with just 55% of American components. By 2029, he wanted that number ramped up to 75%, with companies having to prove that they have met that threshold. Right now, the government spends about $300 billion a year to buy these products.

IAM Local 1717 (District 1) President Joe Gerrity was in the third row to hear what the president had to say. It was a once-in-a-lifetime opportunity for an IAM member who grew up just five blocks from where Joe Biden once called home in Scranton.

“Excellent! That’s all I can say. It was such a great experience,” said Gerrity. “Talking to him was like talking to someone from the old neighborhood.”

And in this case, that was the truth.

“When President Biden’s staff tried to get him to hurry up and move onto others waiting in line to shake his hand, he literally said to them ‘He’s from Scranton, he’s my guy. I love talking to people from the old neighborhood.’ I still can’t believe the president of the United States took time to talk to a guy like me,” explained Gerrity, who said he’s still on cloud nine from that day. “He even took my mother’s phone number, who still lives in the old neighborhood, and promised to give her a call if he had time. That was unbelievable.”

But it was the speech Biden gave that solidified Gerrity’s belief that President Biden is good for workers and the labor movement.

“He said the word union at least 20 times in his speech,” said Gerrity. “That speaks volumes.”

“The increases and enforcement changes to the Buy American program will really benefit U.S. workers,” said IAM Eastern Territory General Vice President Brian Bryant. “This is something the IAM is constantly fighting for. If it’s stamped Made in the USA, it should really mean, Made in the USA. We have the best workers who make the best products right here, so there’s no reason to look anywhere else. You can be sure the Machinists Union will never stop fighting to get that number to 100 percent.”

“My dad has been a union member for 55 years and I followed in his footsteps,” said Gerrity. “It is so important that we have politicians like President Biden in our corner fighting for workers. A stronger Buy American plan is good for all workers. I can’t thank my union enough for this opportunity that I know I will never forget.”