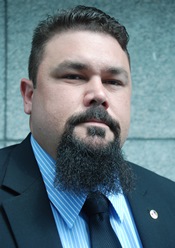 “Bryan brings a fresh perspective and an innovative point of view to the General Secretary-Treasurer’s Department,” said Cervantes. “We welcome him on board and look forward to the contributions he’ll continue to make to our membership. He is the future of the IAM.”

Pinette began his career with the IAM in 2008 when he hired on at Boeing St. Louis. He quickly became involved in the IAM and held many committee positions within his local and district. He was appointed Local 837A Secretary-Treasurer in 2011 and District 837 Educator in 2015.

After the 2012 Grand Lodge Convention, Pinette was tasked with launching the District 837 Young Machinists Committee, which has made great strides promoting union activism within the membership and in the community. In 2014, Pinette ran for a Missouri State House seat, garnering more than 31 percent of the vote in a highly Republican district.

As an eight-year member of the United Auto Workers (UAW) before joining the IAM, Pinette was involved in multiple legislative efforts at the state level in Missouri.  He volunteered his time assisting the financial officer of his lodge.