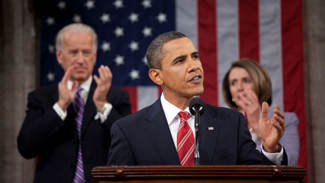 In response to a State of the Union speech that was long on rhetoric and short on specifics, the IAM renewed its call for a more coordinated and aggressive response to the most serious jobs crisis since the Great Depression.

“When one-fifth of America’s workforce is idled to some degree, the full force of government, business, labor and academia must be marshaled to get them back to work,” said IAM President Tom Buffenbarger in a response to the president’s remarks. “But no such comprehensive strategy was outlined.”

President Obama spoke to a joint session of Congress and implored Republicans and Democrats to set aside partisan differences and make jobs the nation’s number one priority going into the 2010 midterm election season.

“When America’s jobless open their morning newspapers, they will know that their national nightmare will last through 2010. The winter, spring and summer of their discontent now will feel interminable,” warned Buffenbarger. “And their growing anger and frustration will find an outlet, most probably in the 2010 midterm elections.”