Promoting Labor Heritage and History in the Home of the IAM 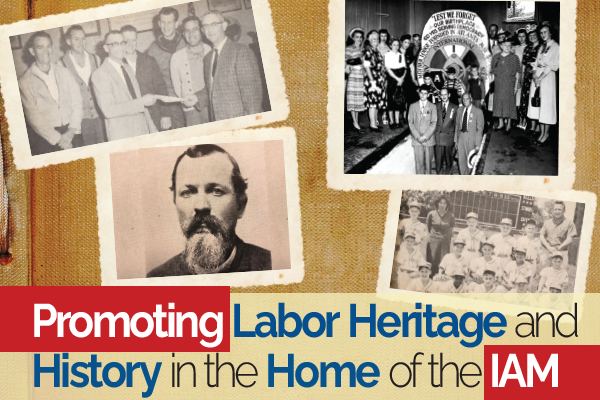 During the month of September, the IAM Southern Territory was the catalyst behind a 30-day campaign about union pride called the Month of Labor. The agenda, which expands Labor Day’s tradition, educated the public and members about the historical significance and current achievements of unions. 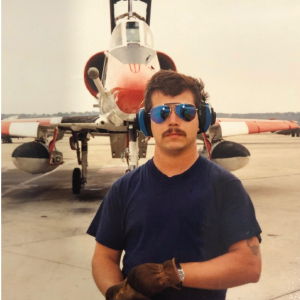 Ramon Garcia in the early 1990s as a Plane Captain at Naval Air Station Kingsville, TX..

“Labor Day is a great time to reflect on how far our movement has come and where it can go,” said IAM Southern Territory General Vice President Rickey Wallace. “But our movement is so broad that one day is not enough to encapsulate the size and scope of labor and how much it means to America.”

The idea for the Month of Labor came to IAM Grand Lodge Representative Ramon Garcia after a discussion he had with his youngest daughter about union history. Garcia’s passion for labor can be traced back to his childhood.

He was raised in a working-class Texas household by his father, an active member of the American Postal Workers Union.

“I went to labor meetings and conventions with him. He rose up the ranks. It just made sense to me,” said Garcia, who became an IAM member in 1991 while working as an aircraft mechanic at the Naval Air Station in Kingsville, TX. “My dad always said the only people who help working folks are working folks. It’s us. If we don’t do it, then nobody will.”

Garcia, a U.S. Air Force veteran and proud grandfather of five who loves sharing union culture with his community, sought the assistance of resources from across the IAM. The result was a campaign that showcased the labor movement’s legendary fight for the eight-hour work day, its role in creating Social Security, the push to close the gender pay gap, and more.

Machinists Union Districts and Locals in the Southern Territory also participated in the month’s social media blitz by regenerating posts with rank-in-file membership. 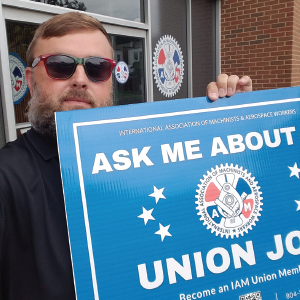 “Create the buzz. Create the discussion. Get people talking,” said Garcia. “I wanted us to come together. Let’s learn what labor is about and why we should be together. We’re labor and we need to be one. We need to bring this message home for the month.”

The IAM Southern Territory, which has tens of thousands of members, has deep roots in American labor history. On May 5, 1888, Thomas W. Talbot organized the United Machinists and Mechanical Engineers of America, now known as the IAM.

Since then, the union’s membership has grown from 19 in 1888 to 600,000 active and retired members. That growth and history resonates with IAM District 2020 Business Representative Charles Mann, a Virginia-based union history buff.

He’s also a 20-year member of IAM Local 10 in Richmond, VA, one of the union’s oldest lodges, opening its doors in November 1888. He believes the Month of Labor was a great way for the IAM to share its rich tradition and history, hoping the campaign will “awaken the core of the rank and file members. We also want to educate potential members,” said Mann.

Mann, whose father became an IAM member in 1974, also hopes the Month of Labor will humanize the plight of the American worker, a message that has the potential to break political barriers in the notoriously anti-union South.

“The Month of Labor 2021 will be the start of the revolution where workers in the South have had enough,” said Mann. “No longer will democracy die at work once you drop below the Mason Dixon line.”

IAM members in Fort Worth, TX also participated in Month of Labor. For decades, good union contracts have sustained working families there as thousands of Machinists have found lucrative employment in the defense and aerospace industry.

IAM District 776 took the month’s meaning and message to the streets on Labor Day. The lodge, under the guidance of District Lead Organizer Keith “Chub” McCrory, helped host a cookout and community event that was attended by hundreds of people from town. 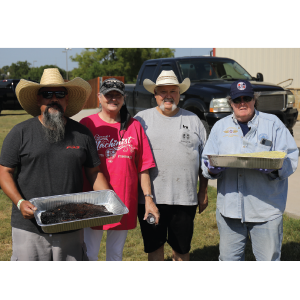 “Our Central Labor Council planned a celebration that was held at a local waterpark, where the IAM served up some good ole’ Texas BBQ to the general public and families of our union brothers and sisters,” said McCrory, a 20-year member of the union. “Labor Month in the Southern Territory is important to me because it is extremely important for us to know where we started. That enables us to see and understand how far we have come, which allows us to be better prepared for the future.”

In addition to food and fun, District 776 handed out informational literature and distributed yard signs that promoted values and virtues associated with Month of Labor’s meaning.
“My hope is this will help us achieve solidarity. We want all workers to understand this country was built on the back of union labor,” said McCrory. “We want to eliminate any negative perceptions that labor unions may have here in the South.”

McCrory says the Month of Labor’s main message was about fairness and freedom on the job, rights that unfortunately elude millions of unorganized workers who reside in notorious Southern right-to-work states.

“The benefits of a union are great,” said McCrory. “We’ve earned retirement, pensions, insurance, safety in the workplace, job security, transparency on the job, a voice at the workplace.”

The Month of Labor also gained traction in Louisiana, where the IAM has a long history of fighting for workers’ rights. Machinists there broke racial barriers in the 1960s when the union gained a strong reputation during the fight for civil rights and equal pay for African-American workers.

Chuck Bennett, president and directing business representative at District W2021 in Lake Charles, LA, promoted the Month of Labor around his region. Bennett, a proud husband of 32 years and father of three children was excited about the Month of Labor because it gave him an opportunity to share information about the benefits of a Machinists Union contract. 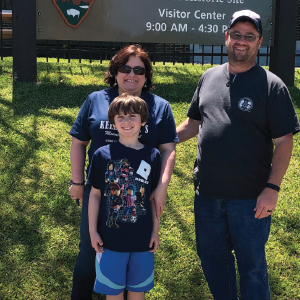 Chuck Bennett, President and Directing Business Representative at District W2021 with his wife and son.

“I had a voice once I hired-on back then and became represented by the IAM,” said Bennett. “I could speak up about safety issues that affected me and my coworkers without the threat of getting laid-off or fired. I finally had seniority protection, which meant job security. My wages increased and my benefits cost less for better coverage. All of this improved my family’s standard of living and I could really start saving for retirement. Did I mention that I also gained a pension plan?”

Bennett and Garcia credit the IAM Communications Department for crafting consistent social media posts that had simple, yet colorful graphics and straight forward messaging, a clear outreach strategy he says piqued interest from younger workers around Louisiana, many of whom never heard of a union.

“I hope the next generation of workers learn that the future is in their hands,” said Bennett. “The next generation need to know that if they do not step up and get active, they will lose these hard won rights and protections that we, and our predecessors, fought for.”

Garcia agrees with Bennett. Back in Texas, he too has shared the Month of Labor’s messaging with young family members.

“I kept finding nieces and nephews who don’t know what a labor union is,” said Garcia. “This was our opportunity to help them learn. This was an opportunity to flood and blanket the community with our story, labor’s story as a whole.”

The IAM Southern Territory says the Month of Labor was successful as it educated thousands of working families in the South, and across America, about labor history and the value of a union contract. 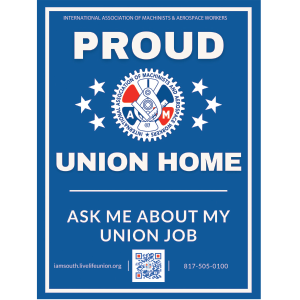