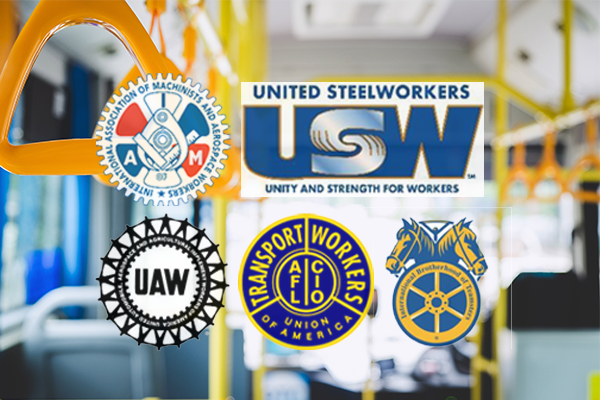 If federal funds are being used by American transit agencies to purchase things like rail cars or buses, those vehicles and their parts, should be made in America.

That’s the message coming from the Machinists Union, which is standing alongside other national labor unions to let Congress know that millions of good jobs, the country’s supply chains, and our global competitiveness are at stake.

“Our members are proud to manufacture equipment used by our government to take care its citizens across this nation. But if federal dollars are used to pay for it, it should made in this country, by workers in the United States, using American ingenuity. This should be non-negotiable,” said IAM International President Robert Martinez Jr. “Our elected leaders need to take action immediately to make sure we aren’t giving away our country’s competitive edge and endangering our national security.”

In a joint letter signed by the IAM, the International Brotherhood of Teamsters, the Transport Workers Union of America, the United Steelworkers, and the United Auto Workers, the group outlined how detrimental it will be to the economy and our national security if this action remains unchecked, putting our country at risk for the future.

“On behalf of millions of workers throughout the U.S. supply chain that supports our transportation infrastructure, we write in strong opposition to any policy actions that would weaken the Transportation Infrastructure Vehicle Security Act (TIVSA),” writes the coalition. “This law was enacted in 2019 to prevent the use of federal assistance administered by the Federal Transit Administration (FTA) from being used to purchase rolling stock equipment from China’s state-owned, -controlled, and -subsidized firms.”

The letter makes clear the importance of protecting the country’s supply chains and ensuring American manufacturing remains a global powerhouse, as well as safeguarding future interests such as emerging transportation infrastructure technologies including electric vehicles, rechargeable batteries and other clean energy platforms.