Punk Band to Anti-Union Governor: ‘We Literally Hate You!!!’ 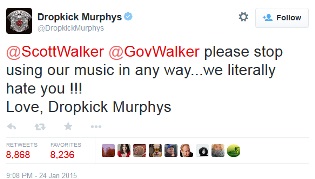 The anti-union governor, best known for stripping collective bargaining rights for most Wisconsin public employees, played the Dropkick Murphys’ hit song “I’m Shipping Up to Boston” as he bounced onto an Iowa stage to deliver remarks this past weekend.

It’s not the first time the Dropkicks have stood up for workers. The band put on a free show for Ohio union members in 2013 while the state’s governor, John Kasich, pushed for a right-to-work (for less) law. The legislation failed.