HELLO AND WELCOME TO MACHINISTS ON THE HILL,
a twice-monthly roundup of legislative advocacy on behalf of IAM members.

IAM DEMANDS CORONAVIRUS-RELATED RELIEF: The IAM sees the president’s recent signature on the Families First Coronavirus Response Act (H.R. 6201) as a first step in an effort to pass a string of laws aimed at helping workers affected by the coronavirus, or also known as COVID-19 outbreak.

The IAM continues to lobby for a crucial relief package that would help stave-off some hardships for workers impacted by the pandemic, including those working for U.S. airlines.

“We are closely monitoring legislative activity in Washington, DC and in Ottawa to ensure that working people are protected both financially as well as with appropriate safety and health provisions,” IAM International President Robert Martinez Jr. said in letter to members on March 19.

U.S. airlines, for example, have slashed capacity by up to 65 percent worldwide due to a drastic decrease in demand for air travel caused by COVID-19 and are mulling a complete shutdown.

U.S. airlines have seen sharp declines in revenue caused by decreased demand. Carriers are bleeding and U.S. airlines could be out of cash by the end of May.

The IAM is also urging lawmakers to sign a letter, which is authored by Reps. Peter DeFazio (D-Ore.) and Lloyd Doggett (D-Texas) on relief accountability to protect workers and ensure they receive the funding appropriated to them during this COVID-19 crisis.

“As Congress works to craft emergency response corporations legislation, we have an opportunity to correct our past mistakes by including appropriate guardrails to protect workers and ensure large put the needs of those workers ahead of their wealthy executives and shareholders,” the House members wrote in the letter. 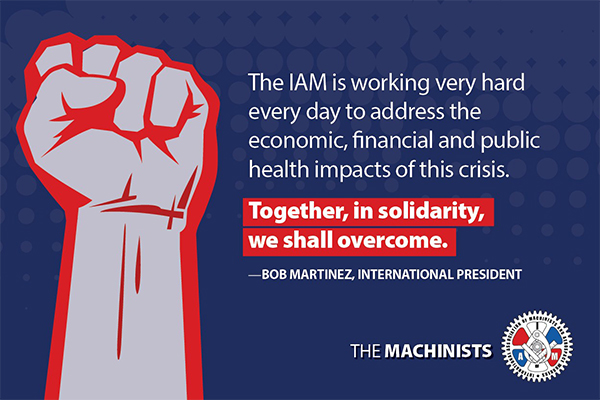 QUOTABLE: “I also recognize that the pandemic poses a significant threat to our economy and to the economic security and livelihood of our membership. On this front we are working with employers to ensure that they are not using this national emergency to advance their economic interests.” – IAM President Robert Martinez, Jr., in March 19 letter to members.

According to National Defense Magazine, Rep. Courtney, the chairman of the subcommittee, said the move was at odds with the Navy’s priorities.

URGING HOUSE MEMBERS TO END OUTSOURCING – The IAM is calling on all U.S. House members to co-sponsor the End Outsourcing Act (H.R. 6121). The bill, introduced by Rep. Mark Pocan (D-WI), would utilize the tax code as well as the federal grant, loan and contracting process to stop the rampant outsourcing of U.S. jobs to foreign nations and help bring these jobs back on to U.S. soil. It is estimated, based on Trade Adjustment Assistance certifications, that nearly 200,000 U.S. jobs were outsourced in the first two years of the Trump administration alone.

FIGHT TO PROTECT COLLECTIVE BARGAINING RIGHTS: The Federal Workers Alliance, a coalition of 30 unions co-chaired by NFFE-IAM, sent letters to Congress requesting their support to ward off a threat from President Trump to use national security as an excuse to override collecting bargaining agreements at DoD.

Congress responded with letters to Defense Secretary Esper, imploring that he not use this authority provided by Trump because there is no justified cause or reason to employ the never-used 30 year-old law.  In addition, Rep. Don Norcross (D-NJ-1) who serves as chairman of a powerful Defense subcommittee in the U.S. House sent a letter inviting Defense Secretary Esper to comment at a hearing on the 26th, noting in the letter that Sec. Esper is reluctant to use the obscure and unnecessary authority provided to him by Trump.

MACHINISTS ENDORSE BIDEN FOR U.S. PRESIDENCY: IAM members have chosen Joe Biden (D) for the union’s endorsement for U.S. president. The endorsement of the former vice president is the result of utilizing an unprecedented democratic process that included a general membership vote open to all U.S. members in good standing. The union’s endorsement is the majority will of the IAM’s membership and its state councils, who voted online through an independent third party in early March.

“Our membership has spoken and chosen a bold, progressive vision for our country that places the interests of working people first. From this point on, we will mobilize our membership to win the Democratic nomination for Joe Biden,” said IAM International President Robert Martinez, Jr. “No matter what happens in the months ahead, it is clear that working people demand a different direction and their fair share of power in Washington and across the country.”

Why labor unions were right on share buybacks Forbes

Call it a layoff, a furlough or a cut shift: Americans are losing work Wall Street Journal