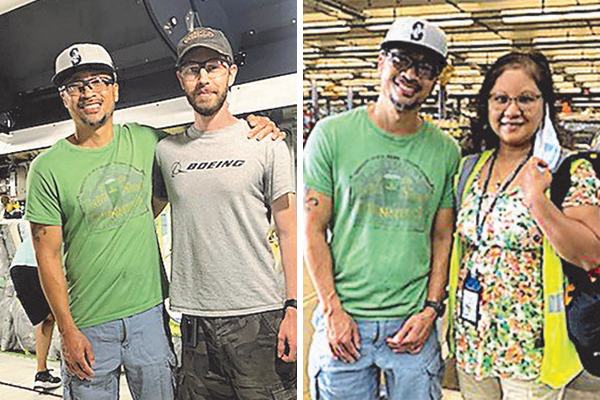 Thank you to IAM District 751 for sharing this information from the Aero Mechanic.

You don’t have to be a doctor to save someone’s life; often times you just have to take action. In fact, quick responses by 751 members saved a fellow union member’s life earlier this year. The incident occurred outside the Renton factory following second shift. 751 member Oudom Khanphongphane left work as he did any other night. On the way to his car, Oudom suffered a heart attack, fell to the concrete, hit his head and lost consciousness.

Thankfully, 751 members, who were also leaving work around that time, found him on the pavement and jumped into action. 751 member Dustin Roads recognized that time was of the essence and immediately began administering CPR, which he continued until the first responders arrived. 751 member “Lilliy” Chhoeup Thorng, called 911 and Boeing security and stayed on the scene until Oudom was transported to the hospital.

If Dustin and Lilliy had not stopped to help, Oudom might not have survived, and his ability to recover as quickly as he did is solely because of the courageous efforts two members took to help a stranger.

Oudom spent three days in a coma before regaining consciousness and remained in the hospital ICU six additional days. Once discharged, he remained home for several months doing speech, occupational and cardiac therapy. Oudom returned to work initially just part time while he continued rehabilitation on his road to a full recovery.

When he returned to the Renton factory, one of his first priorities was tracking down Dustin and Lilliy to give his personal thanks.

“I am so grateful Dustin and Lilliy found me within minutes of my heart attack and jumped into action without hesitation. Their quick thinking saved my life and ensured there wasn’t more damage,” said Oudom. “I was very lucky, Dustin was there and performed CPR. He was at the right place at the right time. I think about that a lot and what might have happened if I had been driving my car at the time.”

Dustin credits CPR training from his last job at an ambulance company and noted, “This was the first time I have actually performed CPR on someone in a life and death situation. Thankfully, I did well under pressure. I knew once I started CPR, I couldn’t stop and had to keep it going until the first responders took over. In the heat of the moment, you just have to trust you will do it correctly because there is no other choice. I’m glad I was able to help.”

“I am proud of our members, Dustin and Lilliy, for stopping and having the courage to help someone in distress,” said IAM District 751 President and Directing Business Representative Jon Holden. “They didn’t know what had transpired before they arrived but because of their quick action a fellow member survived and is now back to work and able to live a full life.”

“I commend Brother Dustin and Sister Lilliy for exhibiting such courage and calm under extreme duress while saving Brother Oudom’s life,” said IAM Western Territory General Vice President Gary R. Allen. “This is an amazing story and another example of how Machinists are always there to help one another. Brother Oudom’s recovery has been a long and arduous one, but through his unparalleled perseverance, he has returned to work and inspired us all.”

Our Union is submitting Dustin and Lilliy for Red Cross Hero Awards for their quick action that saved Oudom’s life or at a minimum ensured he did not have permanent damage.

According to the Red Cross, more than 350,000 people suffer from cardiac arrest every year and only 10% survive. Dustin’s training in CPR and willingness to jump in to help someone in need allowed him to save the life of a stranger who turned out to be a union brother. Hopefully other members will take first aid classes to be prepared should they find themselves in a similar situation.