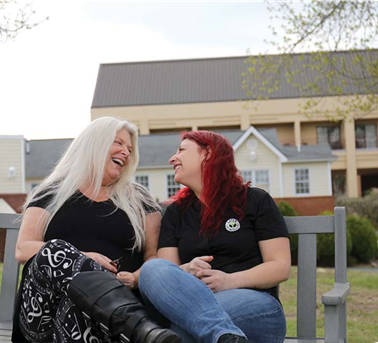 Bartman began the hiring process at three months pregnant, but it was three more months before she got hired and started working.

At the end of her first shift, she was approached by a supervisor who asked if she was pregnant. Bartman begrudgingly said “yes.”

“I wore baggy clothes because I was afraid they would notice how pregnant I was. I told her I didn’t want to get fired on the first day,” said Bartman. “She said we can’t fire you for being pregnant; that’s not the way it works here.”

Federal law protects women from being fired for being pregnant, but employees who are not covered under a collective bargaining agreement can be fired for just about any reason.

“I didn’t know anything about a union,” said Bartman. “I wasn’t sure what the company could or couldn’t do.”

Little did she know, what her supervisor said to her at the end of that shift would spark a lifetime of activism not only for her, but for the baby she was carrying.

The Union Difference
That was nearly 30 years ago. Bartman, now a District 751 Business Representative, has spent most of that time involved in her local and the labor movement.

It didn’t take long for a young Dena to get involved. She wanted to learn more about the union she had heard so much about.

“My dad was only in the union for a short time back in the 50s, then he went into management,” said Bartman. “So we didn’t exactly grow up in a union household.

“I was always the voice for people in the workplace,” said Bartman. “Because of my dad, I had a good understanding of management styles and I could talk to them in a way they could relate. So it seemed destined that I would eventually become the steward in my career.”

Bartman started going to meetings and becoming more involved. The first union position she held was auditor, then trustee, eventually landing as one of the few women on the District Council.

Representing her coworkers is something Bartman fell in love with.

“Supporting my brothers and sisters gives me satisfaction. It fuels you,” said Bartman. “People need a voice, and if you’re good at that, it’s the right thing to do.”

The Next Generation
Meet Gabrielle Rogano. An IAM Organizer who cut her teeth in the labor movement.

She also happens to be the daughter of Dena Bartman. Yeah, that daughter.

While her mother learned about the advantages of being union while Rogano was in utero, her first recollection of union activism was a few years later.

“I remember being around five or six. Mom would bribe me with donuts to go to the union meetings,” said Rogano. “She put me to work. I would hand out donuts to members at the meeting. I loved it.”

“Every strike we went through since Gab was old enough to walk, she was on the picket line with me,” said Bartman.

Rogano went to work at Boeing in shipping and receiving not long after high school.

Then in 2008 came the proud moment when mother and daughter walked the picket line together, as union sisters.

“It was so awesome to be out there with my mom,” said Rogano. “It felt good for us to be able to stand up together with all our brothers and sisters and fight for what we deserved.

“She taught me to stand up for people my entire life, and to be able to get a chance to do it by her side was the coolest thing.”

Rogano said she gets her sense of caring and generosity from growing up in a union.

“We were always taking care of each other,” said Rogano. “Where there was a strike, we always helped with food banks and volunteering wherever there was a need.”

“When Gab was growing up at all these different union events, people would always say to her ‘You’re Dena’s daughter,’” said Bartman. “Or ask ‘Oh are you Dena’s daughter?’It didn’t take long for young Rogano to start making an impact on the shop floor. That’s when her mother noticed a turning point.

“Then the day that it switched to ‘Oh, you’re Gabby’s mom,’ I knew I had turned the reins over. It was amazing,” said Bartman. “I still hear that to this day. I love that. I am Gabby’s mom.”

In a humble sense, as if she didn’t have anything to do with it, Bartman reflects on the pride she has in her Fighting Machinist daughter.

“You always want your kids to do better than what you did, and she’s already surpassed me by the age of 28. I love it, too. That’s how it ought to be,” said Bartman. “I’m so proud.”

A Woman in a Man’s World
Both Bartman and Rogano know what it’s like being a woman in a male-dominated field.

“As a woman, I always feel like I have to prove myself, just to show that I belong,” said Bartman. “You can never let them see that they are getting to you. It’s improving, but we have a long way to go.”

Rogano says she’s worked on organizing campaigns where men would look for a man in the room to ask questions.

“Some of the men would come in and just not want to take you seriously,” said Rogano.

“There were some areas where being a woman played to my advantage. I have a softer touch and that seems to work better at some things. Like in the community, people are really receptive to a woman coming to them and talking about being involved in the community and helping out,” said Rogano.

“But for the most part, you have to prove to men from the plant that you know what you’re talking about before they really listen to you,” said Rogano.

Paving the Way for Women
Both women work hard at getting other women involved in the labor movement.

“As co-chair of the women’s committee at District 751, that’s what

we try to do,” said Bartman. “When we get new women to the committee, I have them get up and read the committee report at the union meeting. I want to get them comfortable speaking in front of a room mostly full of men.”

“Women’s committees gives us the chance to have a platform that we’ve never had before,” said Rogano. “It helps make our unions stronger as a whole because it helps everyone give their input without being excluded. It gives us a chance to speak in large groups and actually be heard.”

“I’ve been fortunate, our district does a great job of recognizing the contribution of women,” said Bartman. “I was the chair of the district’s safety committee, then getting the opportunity to be a business representative.”

A Message to All
These two Machinists would like to see all the women of the IAM get involved. This is their message:

“Don’t be afraid of yourselves, recognize your own strengths and realize you bring a lot to the table, and in order to bring change you have to be involved,” said Rogano. “We can’t be complacent anymore. Be proud of who you are, and believe in yourself.” To the men of the IAM:

“Talk to your sisters,” said Rogano. “Support them and encourage them to get involved. Give them some resources and an environment they feel comfortable being a part of, where they can be a
productive part of our union.”