International Women’s Day (IWD) has been globally recognized as a day of celebration and a call for gender parity, dating as far back at the early 1900’s.

Now women make up half of the labor force, according to the AFL-CIO, and in 10 years it is predicted women will make up 50 percent of union members, too. 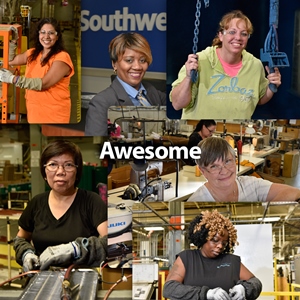 Accompanying the growing number of women in the labor movement is the leadership roles women are taking in their unions. Nowhere is there a better example of this than in the IAM with General Secretary-Treasurer Dora Cervantes and General Vice President Diane Babineaux, two strong women labor leaders who rose through the ranks and set an example for women around the world.

In 2015, Dora Cervantes became the IAM’s 12th General Secretary-Treasurer. She is the first Hispanic woman to ever hold that position.

“I have been inspired by the early women leaders in the labor movement, they were pioneers of their time,” said Cervantes. “I want the women of today to know nothing stands in the way on their path to success, especially in our union. The journey can be difficult, but I am proof it can be done. I challenge the women of our union to lead, be involved and make a positive difference.”

Diane Babineaux is the first African-American woman to serve as an IAM General Vice President.

“I was fortunate enough to have amazing women role models in my life,” said Babineaux. “I strive every day to provide the same thing for the young women in the movement that want to step up and lead their locals, districts and territories into the future. I am very proud of what the Machinist women bring to the labor movement.”

If you would like to be part of the IAM Women’s movement, register for the 2016 Women’s Training Program from June 5-10 at the William W. Winpisinger Training Center. Click here to download the call letter and registration forms before the March 11 deadline.