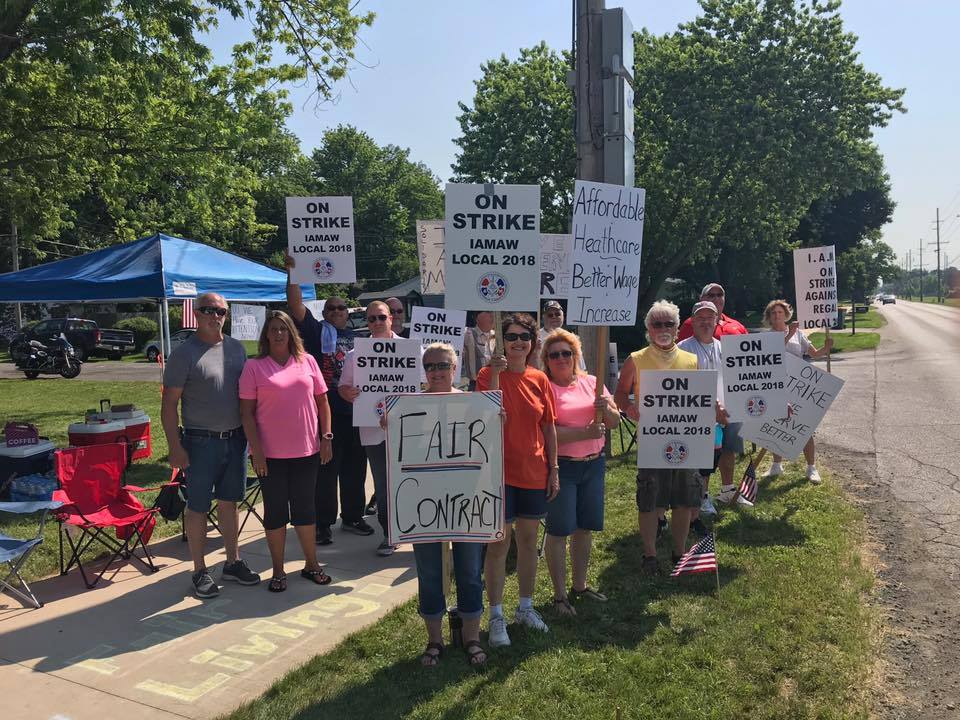 Regal Beloit Manufacturing continues to stonewall negotiations with IAM Local 2018 members on strike in Valparaiso, IN. This after the more than 130 members voted – an overwhelming 99 percent – to strike the company nearly three weeks ago after Regal’s refusal to provide affordable health insurance and better wages.

The IAM presented the company with a reasonable offer to end the dispute on July 16, 2019. The company, refusing to bargain in good faith, rejected the union’s offer and has refused to counter.

“We found out quite early that Regal wasn’t interested in providing a fair and equitable contract as far as wages and health insurance are concerned,” said lead negotiator and IAM Local 2018 Business Representative David Gault. “The cost share that these employees are paying is tremendous. It’s a heavy weight on their shoulders to provide health care to their families. Their wages have been eaten up by increased insurance costs for the past two contracts. We tried to negotiate a fair wage in return, but the company is refusing to bargain in good faith.”

“Our members have shown great courage and determination against an employer that is attempting to break their spirit, while pocketing millions of dollars in profits earned on the workers’ backs,” said IAM Midwest Territory General Vice President Steve Galloway. “These workers aren’t just fighting for their own survival. The way that Regal is trying to force huge, permanent concessions has implications for every working person in America. It’s straight out of the corporate playbook. And everywhere around the world, workers have had enough. They’re getting bolder. And they’re standing up. The Fighting Machinists of IAM Local 2018 have our continued full support.”

“I want every Local 2018 member at Regal Beloit to know that their entire union is watching and standing by their side,” said IAM International President Robert Martinez Jr. “This is the latest example of our how our union is growing more aggressive and bolder by the day. We will simply not allow corporations to attack the way of life we have earned. The Fighting Machinists do not back down to any one and I am proud of our membership in Valparaiso for taking a stand for themselves, their families and all working people.”

A strike rally has been scheduled for Friday, July 19 at 1:30 pm CST outside the Regal Beloit plant facility located at 2300 Evans Ave, Valparaiso, IN.

Indiana Rep. Pete Visclosky is expected to join IAM Local 2018 members for the rally on the strike line.