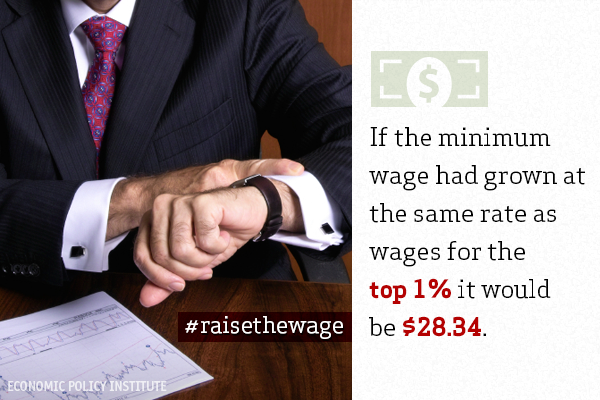 Leveling out the distribution of wealth in the United State is going to take years, said former Secretary of Labor Robert Reich to a joint congressional committee, but increasing the minimum wage is a great place to start.

Reich, along with three other economists, testified before the congressional Joint Economic Committee in a hearing examining income inequality in America.

He told congressional members that, contrary to popular Conservative belief, enacting policies that help the middle class and unemployed are actually good for Big Business.

“One reason the recovery is so anemic is that 95 percent of the gains since the recovery started have gone to the top 1 percent,” said Reich. “There’s no way that the middle class or those that aspire [to the middle class] have enough purchasing power to keep the economy going. What is a business friendly strategy to create jobs? It’s to create customers. Business executives and Wall Street traders are not job creators. The job creators are customers. If the vast middle class and the poor don’t have enough money in their pockets, they can’t be customers.”

Sen. Amy Klobuchar (D-MN), Vice-Chair of the committee, released a new report showing the top 10 percent of workers are now earning half of the country’s total income.

President Obama is expected to make raising the minimum wage a centerpiece of tonight’s State of the Union address. Senate Democrats are expected to follow with formal votes on legislation to boost the federal minimum wage from $7.25 an hour to $10.10 an hour.