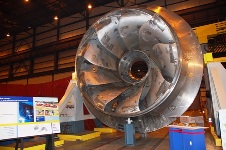 Pennsylvania Governor Ed Rendell joined IAM representatives and members of Local 1400 at Voith Hydro in York, PA, to unveil a report intended to steer the U.S. towards the creation of 700,000 family-supporting jobs by 2025.

According to the study, the U.S. hydropower industry could install between 23,000 megawatts and 60,000 megawatts of additional capacity by 2025, or enough to generate electricity for 31 million additional homes.

Voith Hydro has hired nearly 200 new employees since 2007, a 27 percent increase and the study estimates the future hydropower job creation would be nearly three times higher if renewable energy grows from 10 percent of national electricity supply to 25 percent.
“Hydro power is a reliable source of green energy that has been around for decades,” said Eastern Territory GVP Lynn D. Tucker, Jr. “New technology has allowed Voith to manufacture cost-effective generators and turbines to meet the demand for future hydropower while investing in new equipment and its employees.”