Retired Connecticut Machinist is Guest at State of the Union 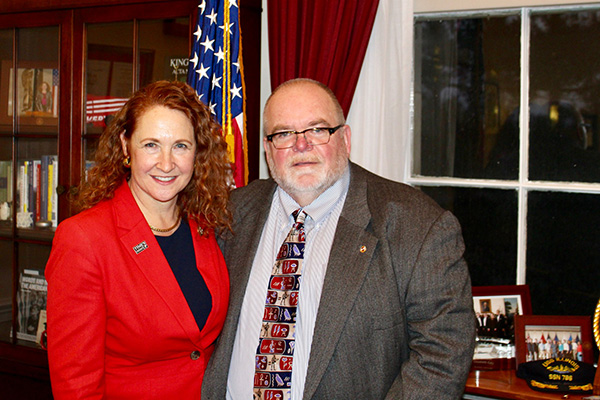 The retired Harrity spent 32 years as a member of Local 1746, and had been President of the Connecticut State Council of Machinists since 2012, representing 10,000 active and retired IAM members on legislative and political issues.

“I’m extremely proud that Brother Harrity was honored by Representative Esty,” said Eastern Territory GVP Jimmy Conigliaro, Sr. “John Harrity has served the Connecticut Delegation tirelessly, and without fail for more than 3 decades. His dedication and service benefitted more than just IAM members, as well. Through political, and legislative activism, his leadership at GrowJobsCT, his work helped working families across the state of Connecticut, and beyond. This recognition was well deserved.”

The Congresswoman first met Harrity when jet engine manufacturer Pratt & Whitney closed its plant in her hometown of Cheshire, laying off 1,000 employees. Esty said her choice of guest highlights the need for job creation and infrastructure investment, which she said are priorities for her constituents.

“I was so honored to be the guest of Congresswoman Esty at the State of the Union and to represent the Fighting Machinists of Connecticut,” said Harrity. “Our state is no different than the rest of the country when it comes to the need of protecting workers and jobs. It’s what I fought for as an active IAM member and what I’ll continue to do as a retiree.”