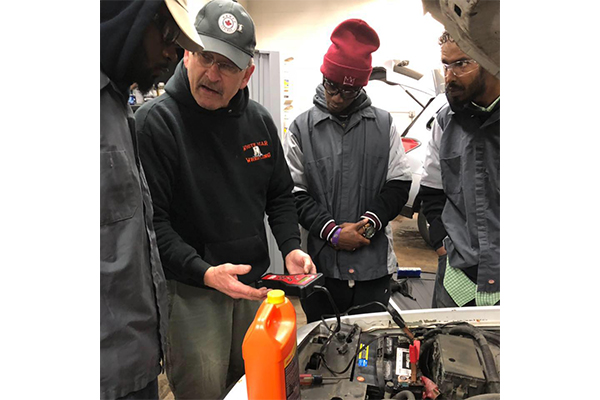 Greg Kinne, longtime Local Lodge 737 member, hasn’t let retirement stop him from passing along the knowledge he attained from almost 50 years in the automotive industry. Brother Kinne has volunteered to teach the basics of auto detailing and maintenance to a new generation eager to forge their career paths at the Twin Cities School in Columbia Heights, MN.

The goal of the free, 12-week course is to give students enough training to land an entry-level job. The class, which is housed in founder Jerry L. Griffis’ detailing shop, also provides opportunities for paid work in the shop upon completion.

“They’re going to know enough about detailing that a shop could take them on and not have to explain everything to them,” Kinne said. “They’re still going to have to learn some things. But I worked 50 years, and I was still learning things when I was done.”

The Twin Cities School emphasizes so-called “soft skills” necessary for success on the job, and Griffis and Kinne have tapped into their connections in the local auto industry to help find interested students work. Those connections include Local Lodge 737 and union dealerships.

“Union shops, that’s what I push,” Kinne said. “Jerry was a manager – one of the few African American managers in our area, but he worked in a union shop. And I know he’s sat down with Local 737 and talked about the school with them, and they’ve been supportive.”

Kinne’s career in the automotive industry began in 1972 when he became a member of IAM Local Lodge 737 and went to work behind the parts counter at Royal Datsun, a union shop in St. Paul where his father was the parts manager.

“Greg has always been active in the Local,” said IAM District 77 Directing Business Representative John Steigauf, “and when he approached the Local with this training vision the E-Board was all on board. Greg is a great example of how retired members can give back to the trade by sharing their skills and life experiences with younger people interested in the trade. We are very proud of Greg and his work!”

“Brother Kinne personifies what the Machinists Union stands for,” said IAM Midwest General Vice President Steve Galloway. “He was eager to help and teach others during his long and distinguished career and has continued in retirement. His work expertise along with life experiences will provide his students with the necessary tools to begin their careers.”