Retiree Activists to GOP: ‘Hands Off’ Our Social Security, Medicare 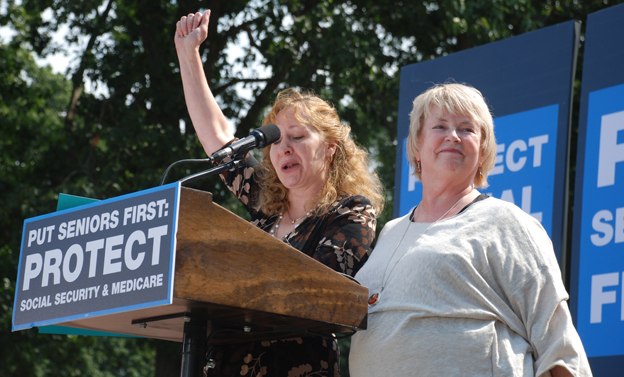 Karen, left, and Joyce Koch fire up activists at a rally on Capitol Hill to preserve Social Security and Medicare.

A coalition of Congressional Democrats and labor and retiree activists took to Capitol Hill to remind voters ahead of the midterm elections that the Republican “prosperity” agenda is going after our hard-earned Social Security and Medicare benefits.

“Keep your hands off Social Security and Medicare,” said U.S. Rep. Bruce Braley (D-IA), who is running to replace retiring Sen. Tom Harkin (D-IA). “We need to strengthen them, not destroy them through risky Tea Party schemes.”

Though Republican candidates in contested districts won’t openly say they support cuts to the vital social safety net programs, the budget authored by Rep. Paul Ryan (R-WI) and passed by the GOP-led House turns Medicare into a “premium support” plan that would force seniors to pay more for coverage. The Senate voted down Ryan’s spending bill in April, but if Republicans gain a majority in the Senate this November, it would make the GOP’s goal of eviscerating Social Security and Medicare frighteningly more attainable.

At a time when two-thirds of seniors rely on Social Security for a majority of their income, cuts to the program are the last thing Congress should be debating, said Sen. Elizabeth Warren (D-MA).

The battle-tested political veterans were also joined by two new voices for the middle class – the Koch Sisters.

Joyce and Karen Koch – unrelated by blood but united in spirit – continued their newly-launched campaign to serve as counterbalances to the right-wing billionaire Koch Brothers.

Their message to members of Congress who want to cut Social Security and Medicare?

“Don’t even try it,” said Joyce, who comes from a union family and recalls her father relying on Social Security to get by in retirement.

“We’re here today, in solidarity with all of you, to remind Congress of its obligation to keep its promises,” said Karen, a university professor and Michigan Education Association member.

For Diane Fleming, a retired IAM member and Alliance for Retired Americans activist, preserving Social Security is deeply personal. Her father died when she was three years old, leaving her mother as the sole provider for Fleming and her sister, an infant at the time.

“Because of Social Security benefits, we were able to survive,” said Fleming, who grew up in a segregated town in Kentucky.

“We’ve been given the facts, now let’s get those facts out to people we know,” said Fleming. “Let’s get active.”

Today, September 23, is National Voter Registration Day. If you’re not registered to vote or have recently moved, register today.