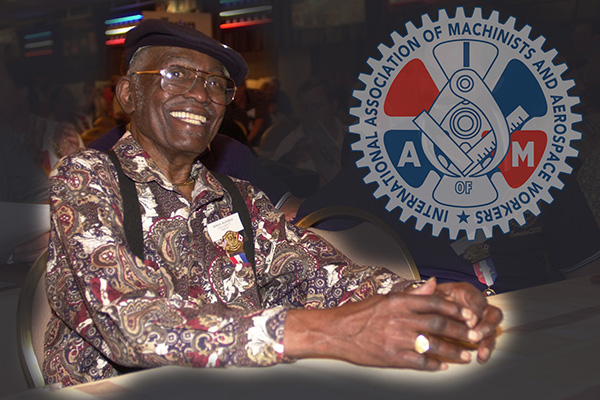 Below is an article provided by IAM District 751 and was originally posted in 2009. We are reissuing it today in honor of Black History Month.

The IAM lost a true hero and friend when brother Roman Mayfield passed away on Tuesday, September 10, 2002 after a prolonged illness. Roman was truly adored by the masses and one of the few people that never had a cross word said about him. A remarkable feat considering he was 81 years old.

This genuine goodwill ambassador truly knew no stranger. If Roman saw a new face at a Union meeting or in the shop, he was the first to embrace and welcome the person and offer to “show them the ropes.” His beaming smile, coupled with his hearty laugh and distinctive voice, could light up any room. His energy and strength were only surpassed by his generosity.

Roman meant so much to this union and to the company he loved. There was never a conversation with Roman that he did not want to talk about work, the union or his co-workers.

Brother Mayfield gave his life to this union, being one of just a handful to participate in all five of our strikes. In each strike, he did far more than just walk the picket line, but took an active role — distributing strike checks, coordinating food to the picket lines, counseling others, and helping anywhere there was work to be done. Helping others was truly a way of life for this very compassionate individual.

Yet his story of union service is even more impressive when you know his history. When Roman hired into Boeing in 1946, minorities were not allowed to join the Union. Roman still attended all union meetings, but could not participate. The union finally recognized minorities and Roman joined in 1950. Roman was an icon at the Grand Lodge Convention in San Francisco in 2000, when a resolution was passed in his honor for the time when the IAM didn’t allow African Americans to belong to the union. Times have changed — in part thanks to Roman’s hard work over the years.

Roman and his wife of 58 years, Albertha, both gave everything they could to their community. They regularly volunteered to care for crack babies at Swedish Hospital, for church events, helped with BEGNF and ECF and so many other activities. Whenever someone needed a hand, Roman was there. Over the years, his desire to help others led him to serve in various capacities from Union Steward to Union counselor to a BEGNF trustee and United Way loaned executive. In addition, he attended leadership school, was a delegate to two grand lodge conventions, was a marshal at the WTO rally, and served as a District Council delegate for two terms, as well as holding a number of other local lodge officer positions.

Roman was a giving soul who cared about others and wanted to make sure everyone was doing okay. His compassion for others shined through as bright as his smile and the friendly laugh that became his trademark. He helped so many, was a friend to countless people and loved by all. Few people can impact so many lives and leave such a lasting impression. One thing is sure — all of our lives are better because of Roman.