Round One Goes to Working People in Ohio Township RTW Fight 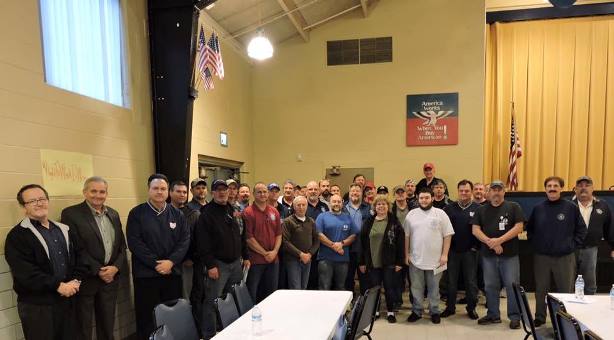 Union members across southwest Ohio flooded the city hall in West Chester Township Tuesday evening to protest a proposal to institute a so-called “right-to-work” (for less) designation for the township. Fighting Machinists stood shoulder-to-shoulder with other local unions in victory as the trustees withdrew the proposal citing the legality of the issue.

Two of the trustees had proclaimed the anti-worker law a priority for the township in 2017 and worked with legal counsel to draft a resolution. Citing a recent federal appeals court opinion that opened RTWFL status to cities and limited home rule townships, the trustees introduced the resolution two weeks ago in a meeting that also saw union members and residents attending in force to speak out against the issue.

Tuesday’s meeting swelled drastically from the previous meeting, with a capacity crowd making the chamber standing room only, forcing the overflow crowd into every available space in the hall. Chairs were added to the lobby, side rooms, and many still were left outside the doors on the sidewalks.

Within the opening minutes, trustees proposed and approved removal of the resolution, citing a pending ruling on a motion to reconsider the previous ruling from the federal court of appeals.

“This isn’t about the freedom to choose, this is an attempt to cut wages, lower benefits and eviscerate worker protections,” said IAM Local 912 President Eric Kratzer. “Ironically today is the 65th Anniversary of Local 912 being chartered in 1952. It’s all the more fitting that our retirees mobilized by the dozens to stand against this attack on our brothers and sisters in this community.”

“IAM members and working union families aren’t going to idly standby while big special interest groups attack their well-being with bad ideas – schemes to rob them of wages, benefits, and a better way of life,” said Eastern Territory General Vice President Jimmy Conigliaro, Sr. “I’d like to thank all of the IAM members, retirees, Eastern Territory staff and the other unions who came out in support of working families, not just in Ohio, but all across the country. This is a very real threat, and sadly it isn’t likely to end here.”

Even with the withdrawal, residents, business owners, and property owners took time to address the board. Comments were respectful, yet pointed regarding the proposed rule change for their community. Several noted that the term of office for board president Mark Welch, a publicly staunch supporter of right-to-work, is up for reelection this year.

At least one Trustee, Lee Wong, has made his dissent from the board on the issue, not only public, but as a matter of record during the meeting, calling it a “state issue.”