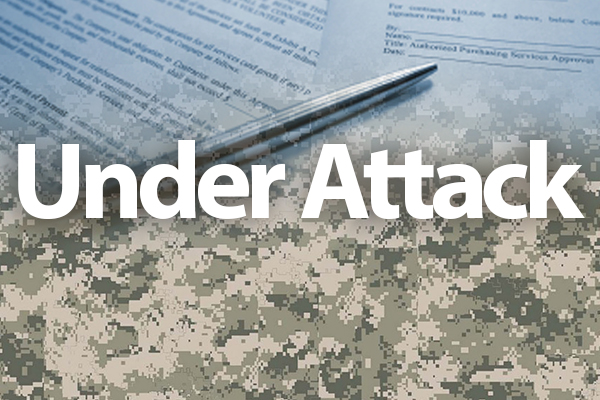 A dangerous proposal in Congress is risking our national security in an attempt to gut the workplace rights of Department of Defense (DOD) employees and contractors.

Behind closed doors, the Senate Armed Services Committee is considering proposals in the 2018 defense spending bill (NDAA) to exempt DOD from complying with the Service Contract (SCA) and Davis-Bacon acts. That would scrap important wage, safety and health standards for working people on federal contracts.

“Without the protection afforded by these acts, companies will drive down wages and benefits in order to maximize profits,” said IAM International President Bob Martinez.

Read the IAM’s letter to Congress. Thousands of Machinists Union members support our service men and women at military bases across the country. Many are veterans themselves.

This dangerous idea would lead to the deteriorating quality of vitally important DOD contract work. Low wages and poor morale among private airport security screeners were found to be contributing factors to the 9/11 attacks.

Another short-sighted proposal would limit federal employees at DOD to as few as two years on the job.

“The institutional knowledge that develops over time will deteriorate, all to the benefit of our adversaries,” said Martinez.

If you live in one of the below states, please call (202) 224-3121 and ask to speak to your Senator on the Senate Armed Services Committee. Make sure they oppose any attempt to risk our national security by slashing rights for DOD workers and contractors.