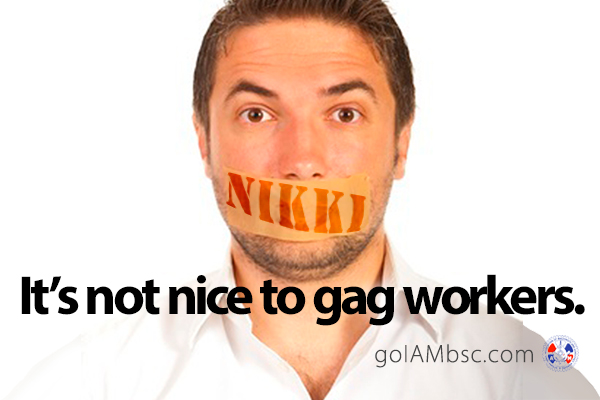 Haley, as she has numerous times as governor, showed no respect for the federally-protected rights of workers in her own state.

“I cannot express to you the extent to which this is a game-changer when we are trying to bring new businesses to our state,” Haley said of the South Carolina’s 3.7 percent unionization rate, the third-lowest in the country. “We have a reputation – internationally – for being a state that doesn’t want unions because we don’t need unions.”

She hailed Boeing’s “magnificent progress” in the state – buoyed by over $500 million in tax breaks paid for by South Carolina’s working men and women. That progress, Haley said, is “under attack” by employees at Boeing’s North Charleston’s plant who want a meaningful voice at work through an IAM contract.

Just days earlier, a radio ad featuring Haley urging Boeing workers to reject union representation began airing in the Charleston area. It isn’t clear if the ad was paid for by South Carolina tax payers, Boeing or a third party.

“Nikki Haley seems to forget that the right of workers to organize in South Carolina is the same as it is in any other state,” said IAM International President Tom Buffenbarger. “It’s more obvious than ever that Boeing’s North Charleston workers need a strong union to help them protect their interests.”

Haley continued to repeat false information about a 2011 National Labor Relations Board suit brought against Boeing for illegally retaliating against its union employees.

“Boeing broke the law and transferred work illegally,” said Buffenbarger. “This is just another example of a politician lobbying for a large corporation at the expense of working people.”

“Workers in North Charleston, and across South Carolina and the country, care more about the safety and security of their job than the political games being played by a governor,” said Buffenbarger. “The IAM will stand by these men and women every step of the way as they work toward the only assured way to a meaningful voice on the job – a union contract.”