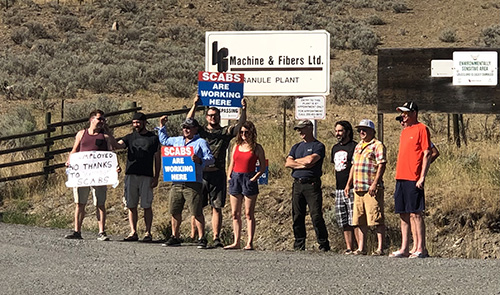 “Our members have faced difficulties, but they are not going to back down,” says a combative Andrew Tricker, Business Representative for District 250 in British Columbia. “The company is clearly using replacement workers – also known as scabs – to do the work. Where we had 40 skilled members doing the work, they now have 10 doing work that is probably very dangerous! From 18 or 19 truckloads leaving the plant, they now only have one or two.”

Tricker makes the case that quality and health and safety is likely at risk and that the community of Ashcroft as well as customers of IG Machine and Fibers should take note of this. Tricker and District 250 have already filed an Unfair Labour Practice complaint with the BC Labour Relations Board.

“We should all be very concerned about the health and well-being of the workers at the plant right now,” says Tricker. “They may be scabs, but they are also human beings and they don’t deserve to be injured because the employer refuses to bargain in good faith.” Tricker noted that maintenance would normally be done on machines three times a week, but has information that no maintenance has been done for the last month. This would seriously imperil the scab workers currently at the plant.

Besides presenting weaker and weaker offers, the company has sent the workers emails and letters to their homes, which could be a violation if deemed to be bargaining directly with the employees. Tricker feels they are driven by ideology rather than any desire to resolve problems and return the plant to its former productivity.

Because Ashcroft is a small town and community, and the workers, as well as the scabs are from there, Tricker worries about the deep social divide that has been created. “We know from past labour disputes that deep splits in the community rarely ever heal. This is a permanent wound to those who live here and I’m not hopeful about the problems the company has knowingly created.”

Tricker is firm making sure his members are properly treated and properly paid. “Good work is not cheap work,” he concluded. 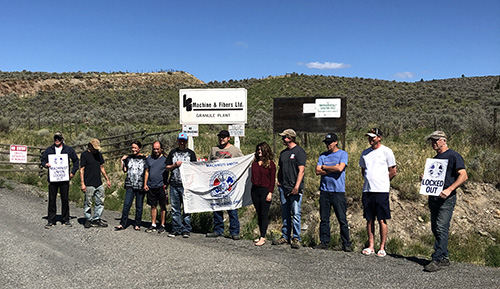