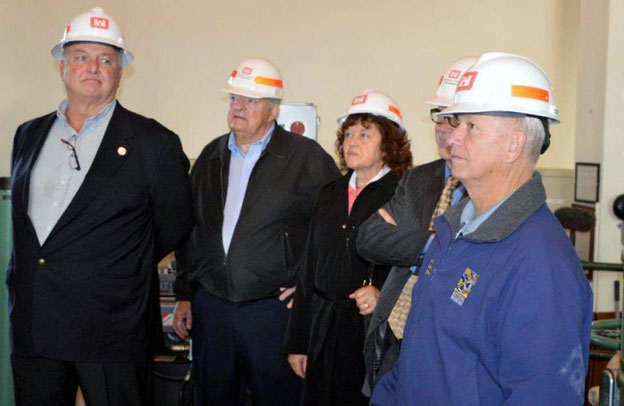 Labor and business representatives of the Seaway Task Force toured the Soo Locks in Sault Ste. Marie, MI to learn firsthand how important the facility is to the U.S., Canadian and global economies.

The tour is part of the task force’s efforts to educate the public about the need to modernize the lock system to make sure commerce will flow unimpeded on the Great Lakes.

Task Force Chair and IAM Eastern Territory General Vice President Lynn Tucker, Jr. said the need for a new lock that can handle the larger ships on the Lakes is vital. Tucker, who also serves as the AFL-CIO Maritime Trades Department (MTD) Executive Board Member for the IAM, noted how the local economy was adversely affected earlier this year when the Poe Lock was out of commission for three weeks.

The Poe is one of four locks in the Soo Lock system. Only the Poe, which was rebuilt in 1968, is capable of handling the largest 1,000-foot lake vessels. The MacArthur and Davis locks, built decades ago, handle smaller traffic, and the Sabin Lock, built in 1919, is no longer in service.

“We need to make sure commerce can flow freely on the Great Lakes,” said Tucker. “When a lock is out of service, it’s not a problem just for workers in the United States and Canada, but for workers around the world. A new lock at the Soo is important for global competition, national security and jobs.”

The task force has been calling upon members of Congress in the Great Lakes region to make construction of a new lock an infrastructure priority. The group proposes using the footprint of the existing Davis and Sabin locks as the base for the new channel.

The MTD has been an affiliate of the Seaway Task Force since it began five years ago. Earlier this year, the Michigan and Toledo port councils issued resolutions calling for a new lock.

In addition to fighting for a new lock, the Seaway Task Force supports the Jones Act, the Title XI Shipbuilding Loan Program and good jobs. More information about the task force may be found at seawaytaskforce.org.