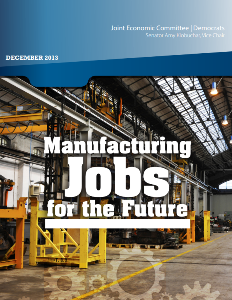 Additional investment is needed to preserve and create manufacturing jobs that are critical to the middle class, according to a report released by Democrats on the congressional Joint Economic Committee.

The report, “Manufacturing Jobs for the Future,” advocates for increased worker training, more access to capital for businesses and opening foreign markets. Its recommendations are part of the Manufacturing Jobs for America agenda put forth in October by Sens. Chris Coons (D-DE) and Amy Klobuchar (D-MN).

Manufacturing jobs, which are up 555,000 since February, have average monthly earnings 38 percent higher than new workers in other industries, according to the report. Each job in the industry supports 1.6 additional jobs.

“Today, manufacturing jobs are worth fighting for,” Coons said. “They pay more in wages and benefits. They help create more local support and service jobs. They contribute more to the local economy than any other sector.”

The report highlighted the Innovate America Act, which would boost science and math education, and two pieces of legislation, the AMERICA Works Act and the SECTORS Act, which would increase access to job training programs.

Click here to read the “Manufacturing Jobs for the Future” report.