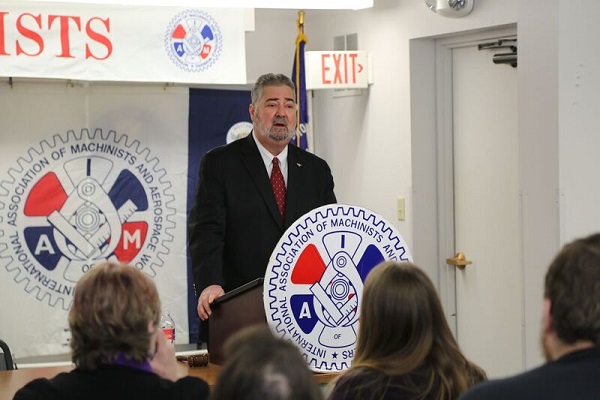 IAM International Bob Martinez traveled to Minnesota this weekend to deliver a message of solidarity to more than 900 IAM Local 623 members in St. Cloud.

Electrolux, a Sweden-based freezer and refrigerator manufacturer, recently announced plans to close its St. Cloud manufacturing plant by the end of 2019.

“Electrolux has been operating in St. Cloud for 30 years and these workers deserve dignity and respect from Electrolux and we are demanding that the company rescind its decision to close,” Martinez told delegates to the Minnesota State Council of Machinists. “The IAM is taking a stand against these companies who are turning their backs on U.S. workers.”

We should all be outraged at @Electrolux, a profitable company that wants to leave Minnesota and lay off 900+ hard-working people. Today I'm there to let @IAMLOCAL623 members know that their union is doing everything we can for them. pic.twitter.com/eWJ9159gig

The IAM, as well as Minnesota politicians, are urging Electrolux CEO Jonas Samuelson to immediately reconsider the company’s decision to leave St. Cloud.

Electrolux management offered no advance notice of the plant closing before its Jan. 30 announcement.

We are demanding that @Electrolux rescind its decision to leave Minnesota. RT if you stand with @IAMLOCAL623 members and against corporate greed that threatens 900+ jobs. pic.twitter.com/dNAV8ubYgl