Show Me a Fight 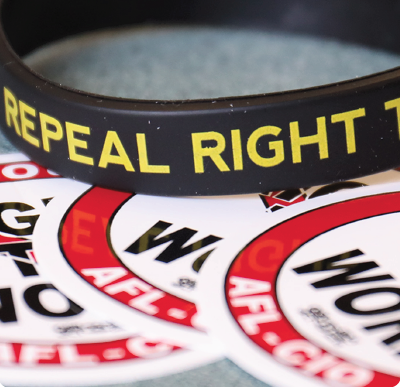 When the results began pouring in on election night 2016, Missouri’s labor movement knew it had a fight on its hands.

Former Gov. Jay Nixon’s veto power had kept the Show Me State from enacting a so-called right-to-work law, which weakens unions by allowing people represented by unions to opt out of paying dues.

It didn’t take long for working people to strike back. The day after the newly-elected governor, Eric Greitens signed the anti-union law, a referendum petition was filed to freeze the law and put it on the ballot in 2018.

What unfolded was the biggest union mobilization effort since the Wisconsin and Ohio battles in 2010 and 2011.

“We had plenty of our members stepping up and volunteering to collect signatures,” said IAM District 9 Directing Business Representative Mark Conner.

To get on the ballot, workers’ rights advocates needed signatures from registered voters totaling at least 5 percent of the last gubernatorial election from two-thirds of the congressional districts.

In total, about 310,000 signatures were turned in to the Secretary of State’s office before the deadline—nearly three times the amount required to put the issue on the ballot.

The Missouri State Council of Machinists has been out in front of the effort. The council streamlined IAM locals and districts throughout the state and made sure every member had access to a petition. Missouri AFL-CIO President Mike Louis, a Machinists Union member, has united the state’s labor movement around repealing the harmful law.

Machinist locals and districts put a structure in place to funnel petitions to shop floors where stewards could collect signatures.

“I’m so proud of what the people in our state were able to accomplish,” said Conner. “It’s been an amazing thing to be a part of.”

IAM Local 778 Trustee Brian Simmons spent months working with the We Are Missouri campaign as a regional petition director.

“It wasn’t a question of whether or not I would be involved, it was more of how much,” said Simmons. “I’m glad I got as involved as I did. I was lucky to get to see a different side of things as regional petition director.”

“There was so much energy in the volunteers,” said Simmons. “Starting out, a person getting 500 signatures a week was no problem. Once they got all the low hanging fruit, it was a lot more work finding people who hadn’t already signed the petition.”

The time spent working with the volunteers was an experience he will never forget.

“One of the greatest things was getting out and meeting so many wonderful people and great union leaders,” said Simmons.

At the heart of the ground campaign has been TCU-IAM Local 6762 Chairman Kelly Street. Street volunteered as the Cass County Coordinator and set up in parking lots throughout the Missouri countryside. He also helped train other volunteers to collect signatures themselves.

“I had to get involved,” said Street. “I run my mouth a lot about being a proud union member and I have to back it up with action. It’s something I believe strongly about.”

“I made it my goal to get out to the rural areas to educate voters on the union-busting law,” said Street. “Too often these people get forgotten and I wanted to make sure they were included.”

Hitting those remote areas takes a toll on personal time and resources.

“I passed up a lot of fun stuff this summer, putting nearly 5,000 miles on my truck and motorcycle collecting and turning in signatures,” said Street. “I don’t mind though. I do it because it’s the right thing to do.” Street takes the fight against the anti-union law personally.

“It’s an attack on our way of life,” said Street. “I’ve worked in right-towork states. I’ve seen the wages and working conditions. We aren’t going backwards in my state.”

Thanks to the activism of people like Street, Missouri will vote in November 2018 on whether their state will be the next to adopt right-to-work legislation.

A big question for the Missouri labor movement is, “what now?”

“We can’t just sit back and wait until it’s time to vote,” said Simmons. “We have to get out and educate voters. Our volunteers are energized, so we must find ways to keep them busy.”

The anti-worker law is meant to break unions. That’s not happening in Missouri.

“It’s always said that good things come out of something bad,” said Conner. “That’s truly the case here in Missouri with the right-to-work fight. The union movement has never been more energized and solidified in this attack on our livelihoods.”