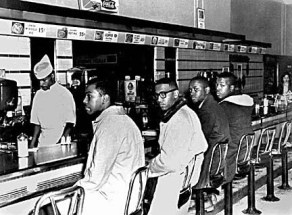 Three of the four students who faced extraordinary abuse and harassment in 1960 when they sat down at a whites-only lunch counter in Greensboro, NC, will return to the city as guests of honor when the AFL-CIO holds its annual Martin Luther King, Jr. Holiday Observance.

The January 14-18 event, which draws labor and civil rights activists from across the nation, will include workshops, speakers, community service activities and a review of civil rights progress since the 1960 sit-in.

While the Woolworth’s department store that was the scene of the sit-in was torn down in 1993, the three civil rights pioneers who made their stand there are still kicking and will be honored at a special event on January 16 to mark the 50th anniversary of their action.