Solidarity Rally for Machinists at Caterpillar 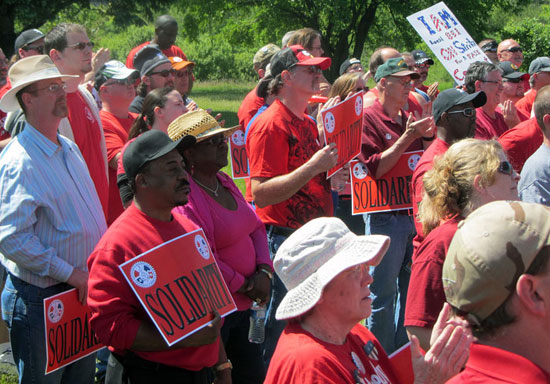 Hundreds of IAM members gathered under clear skies in Joliet, IL to hear lawmakers, candidates and national union leaders express support for members of Local 851, District 8, who are in the third week of a strike against Caterpillar, Inc.

Local 851 members voted overwhelmingly on May 1 to reject a contract from Caterpillar that would freeze wages of all workers for six years, increase the use of “supplemental” workers to 20 percent of the workforce and double health care cost while gutting pensions and seniority rights.

Caterpillar frequently claims it needs wages and costs to reflect “market conditions.” The claim was mocked throughout the rally by speakers who noted the company recently boosted compensation for Caterpillar’s CEO Doug Oberhelman by 60 percent in 2011, to nearly $17 million.

“The practice of raising executive compensation to obscene levels while making it harder for working families to pay for basic medical expenses is impossible to justify at a company as successful as Caterpillar,” said IAM President Tom Buffenbarger, who addressed strikers at the rally.

Caterpillar is the world’s largest manufacturer of mining and construction equipment, diesel engines and industrial gas turbines. In 2011, the company generated $4.9 billion in earnings, with over $60 billion in revenue. In the first quarter of 2012, Caterpillar has already generated $1.5 billion in profits.