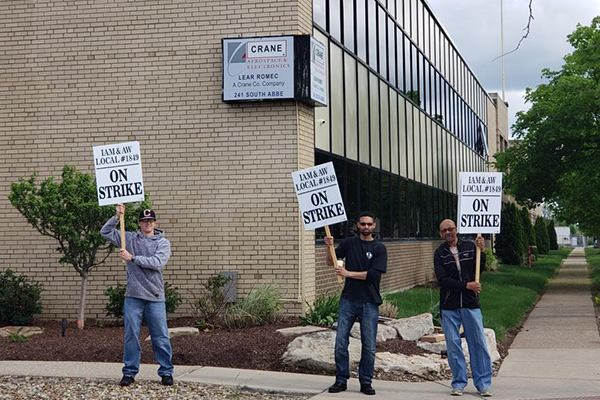 More than 100 members of IAM Local 1849, District 54 employed at Crane Aerospace in Elyria, OH ratified a new four-year deal last night, ending a brief but effective strike. The members took to the picket line voting to reject the company’s last offer to the union shop committee on Monday.

The new four-year agreement features a 10.75 percent wage increase over the life of the agreement, a $1,500 bonus, a secured 5 percent cap on employee healthcare contribution, and added job security language. The new contract took effect immediately on May 21, with employees returning to work.

“After rejecting the company’s last offer, members stood in solidarity on the line enabling leadership to return to the table, address their demands and secure a new agreement for the next four years,” said District 54 President and Directing Business Representative T. Dean Wright Jr. “I would like to thank our Brothers and Sisters of Local 1849, and Business Representative Jerry Espy for a job well-done.”

“Great effort by all involved to return to the table quickly,” said Eastern Territory General Vice President Jimmy Conigliaro Sr. “The negotiating committee continued working towards resolving the issues and the proof is in the results. My appreciation to the members of Local 1849 and District 54 for a job well done.”