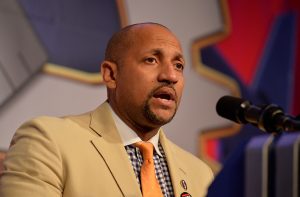 “Hasan has been our voice on Capitol Hill for well over a decade, fighting off the attacks on union members from those who want to take away our power,” said IAM International President Bob Martinez. “He demonstrates the very best of what the IAM is about and we could not be prouder to have him representing us and the entire labor community.”

The CBCI is a non-profit, non-partisan, social purpose organization focused on training the next generation of political leaders and providing voters with relevant information regarding issues in their communities.