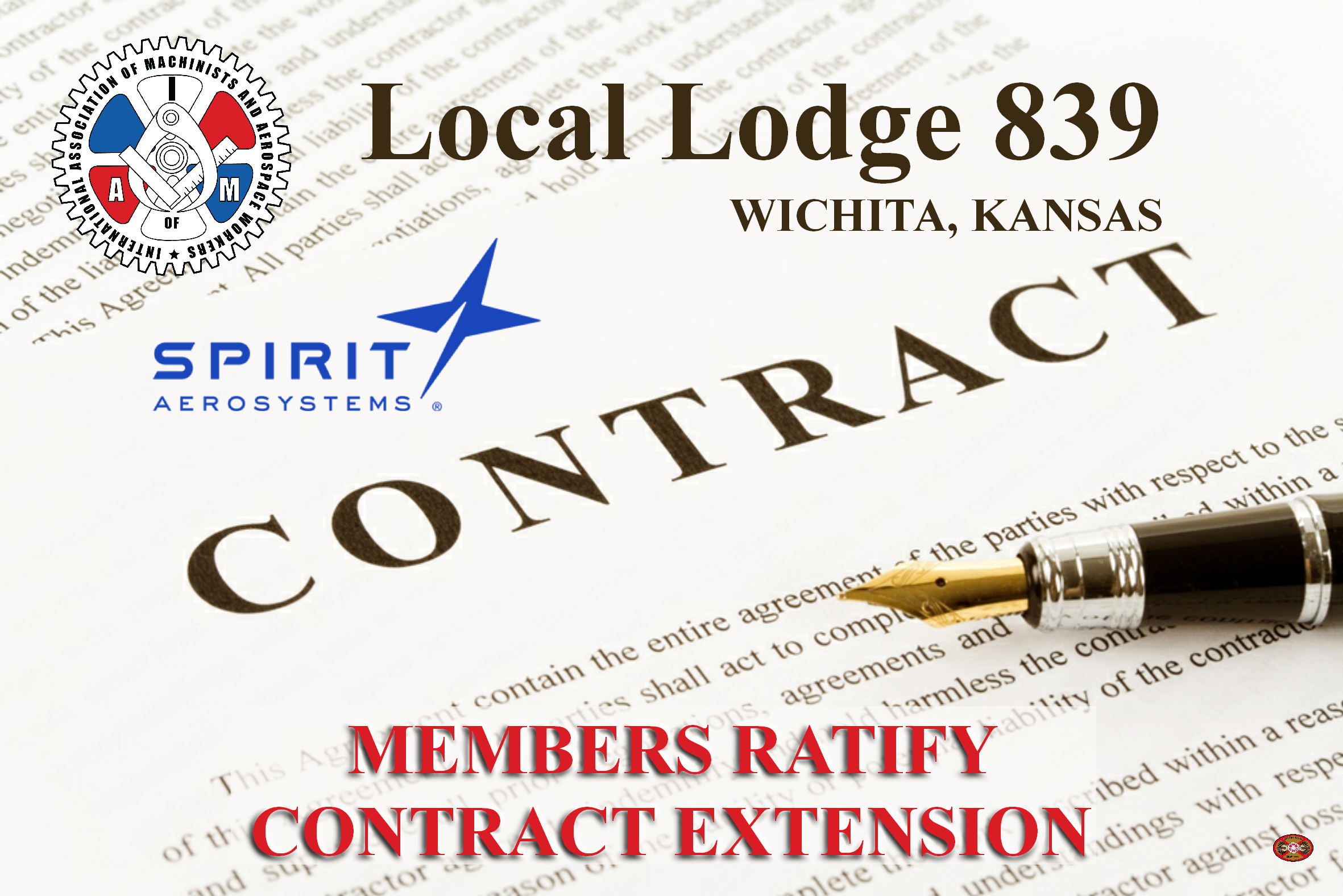 Thousands of Machinists from IAM Local 839 in Wichita, KS used their vote as their voice and by nearly 70 percent, approved a three-year contract extension with Spirit AeroSystems.

“With the grounding of the 737 Max and the recent layoffs, the members of Local 839 have had to endure a lot in the last few months,” said IAM Southern Territory General Vice President Rickey Wallace. “This vote allowed the members to be heard and have a say in their future. We are proud of the work done by the negotiating team to bring this agreement to the membership, which focuses on the priorities of the Machinists on the shop floor at Spirit AeroSystems.”

The three-year agreement addresses a number of worker concerns voiced by the members through surveys and town hall meetings, specifically maintaining affordable health care, which was a priority for Spirit employees. The agreement keeps the current core medical plan for the life of the contract, with the employee share remaining at 20 percent as it has been in the past. Another major advantage is that the contract takes on future health care costs with a negotiated cap on premium increases of 7 percent. What that means is that if health care costs rise more than 7 percent due to inflation, the company will pay the difference and not the workers.

“Our Local 839 membership has been dealing with a lot of uncertainty due to matters outside of their control,” said IAM International President Robert Martinez Jr. “We are extending every resource available to both our membership and the entire community to deal with the layoffs at Spirit AeroSystems. In the meantime, utilizing their rights as IAM members to shape the course of their futures, our membership has made a decision that restores some level of certainty as to their next steps forward. The entire Machinists Union stands with these Brothers and Sisters and supports their decision.”

Wages were another area of improvement for bargaining unit members. General wage increases totaling 7.5 percent will be seen throughout the three years as will improvements to cost of living (COLA) adjustments. In this extension, workers will see their COLA payments rolled into their wages instead of being paid out in a lump sum, allowing stronger financial growth for workers and their families.

Faced with a current layoff situation due to the grounding of Boeing’s 737 Max aircraft, which Spirit AeroSystems supplies, the team worked together to put into the extension agreement a voluntary retirement plan (VRP) for senior employees. If you are 55 years old, with ten years of service, or 60 years old with five years of service, you now qualify for voluntary retirement that comes with a one-time, $50k lump sum incentive. Also, when ratified, all IAM employees involuntarily laid off as of January 10, 2020 will receive continual medical coverage for the full months of March and April with the company paying the employee’s premiums for one month.

“In this time of great uncertainty with the 737 Max, the membership of Local 839 voted to discuss an extension with the company. Today, they made their decision to accept. Getting this contract with more than 7 percent in general wage increases, a yearly cost of living increase rolled into base wages, participation in bonus generating programs to achieve additional compensation, maintaining the IAM National Pension Plan, freezing health care cost increases with protection from inflation, as well as maintaining job security and recall language is a big win,” said General Vice President of the Aerospace Department Mark Blondin. “It is one of the better contracts in the aerospace industry and I’m very proud of the negotiating team. This decision by Local 839 members secures a stronger future for all of Spirit employees as well as Machinists Union members. Aerospace remains a strong and vibrant industry, born and bred by union members, past and present, in Wichita. This negotiating team did a journeyman’s job.”