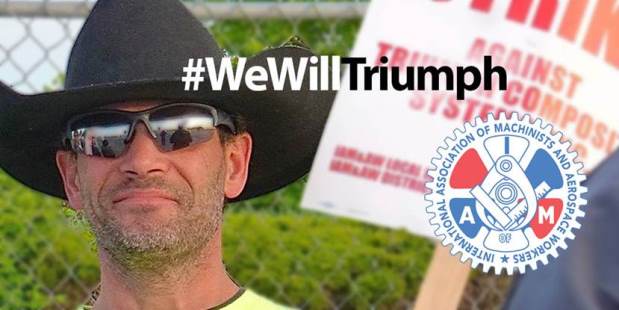 Machinists Union members locked out at Triumph Composite Systems are gaining support from union workers and community advocates from across Washington state and the nation.

On Wednesday, the first day of the lockout, Teamsters Union Joint Council 28 instructed its members to honor the picket lines at the Triumph plant on Flint Road.

“We wish you every success in your endeavors,” Council President Rick Hicks wrote to Machinists in his letter announcing the decision.

The lockout, which centers on the union’s struggle for fair wages and retirement security, started at 12:01 a.m. on Wednesday, May 11. As of May 13, there had been no talks between the company and the union.

Even before the lockout, the union representing engineers at Triumph, said that none of its members would do work normally assigned to striking Machinists during the lockout.

Assigning members of the Society of Professional Engineering Employees in Aerospace (SPEEA) to do work normally done by Machinists would both violate the terms of SPEEA’s contract with the company, as well as SPEEA members’ rights under federal labor law, the union said in a letter to Triumph’s managers.

SPEEA will host a lunch on the picket line for locked out Triumph workers on Wednesday.

And Liz Moore, along with others from Peace and Justice Action League of Spokane, which fights for economic justice, joined the union’s picket line Thursday. The group has pledged its support and is looking for other ways to help.

Steve Warren, the business representative for IAM Local 86 in Spokane, noted that other union workers had provided informal support to the picketers during the first two days of the lock out.

Union teachers, steelworkers, ironworkers, transit workers, food workers, nurses and letter carriers all have stopped by the picket line to lend their support to the 403 locked out Machinists, he said. Some picked up picket signs and joined the strikers, others delivered bottled water and food.

“This kind of support from our friends and neighbors here in Spokane means a lot,” said Warren. “This isn’t just our fight, as Machinists. We’re doing this so that the jobs we have here in Spokane are good-paying jobs, with good benefits. We want them to be the kinds of jobs that can support a community, so it’s great to see this kind of community support.”

Meanwhile, in Seattle, members of IAM District 751—which represents more than 30,000 aerospace machinists statewide — are stepping up their support.

Local 751-C and Local 751-F each represent about 6,000 aerospace workers at the Boeing Co. and aerospace parts manufacturers around Puget Sound.

The Spokane lockout also is attracting attention from other unions nationally.

From Indiana, officers with United Auto Workers (UAW) Local 9 have sent words of support. They work for Honeywell International Inc. – building wheels and brakes for jets built by Boeing and other companies — and were locked out by their employer after they rejected a contract that would have included massive increases in health care costs.

“Makes me proud to see the working class stand up for their rights and skills,” wrote UAW Local 9 Steward Adam Clevenger. “If we can do anything to spread your message let me know.”

Another UAW lodge, Local 1033 in Forest, OH, sent a message of support to the locked out Triumph workers. That union, which represents Triumph Group workers who build heat exchangers and related systems for aircraft, is closely watching the company’s behavior during the strike, because their contract is up this year as well.

“This isn’t just Local 86’s fight, or even District 751’s,” said District 751 President Jon Holden. “This is truly a national struggle for fair wages and retirement security, and the front line of that battle right now is in Spokane.”

This article is reposted with minor edits from the IAM District 751 Blog.