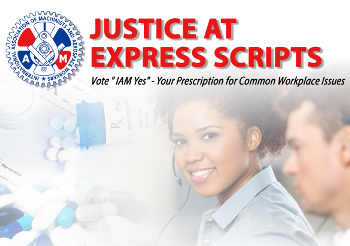 IAM District 837 has filed a petition with the National Labor Relations Board (NLRB) to bring Justice at Express Scripts, a pharmacy benefit management company based in St. Louis.

The petition was filed after a significant number of more than 275 Express Scripts pharmacy technicians, production clerks and warehouse workers signed authorization cards expressing interest in IAM representation after an unsuccessful election in 2013.

“We lost that election because Express Scripts promised the workers a lot of things in exchange for not joining the union, including fixing the issues of forced overtime, wages and an overall lack of respect on the job,” said IAM District 837 Business Representative/Organizer Mike Lloyd. “Three years later… very little of those concerns have been addressed. In fact, it wasn’t until the company learned about the IAM petition this week that they finally addressed the overtime issue. The union came in and like magic the overtime issue was resolved.

“We’re trying to show these workers the power of unions. Having a union makes companies move. Now let’s seal the deal by voting ‘IAM Yes’ and forcing Express Scripts to address the rest of workers’ laundry list of concerns, and putting those solutions in writing through a strong union contract.”

Efforts by Express Scripts workers to form a union have already been met with stiff resistance from Express Scripts management, whose reputation precedes them, as the company has been voted the second worst company to work for in the U.S. every year since 2013.

The company has delayed the union election until Friday, October 14 and Tuesday, October 18, 2016 in an attempt to gain more time to persuade workers to vote against joining the union.

“Express Script workers have a legal right to an election process that is free of intimidation and harassment,” said IAM District 837 Directing Business Representative Steve McDerman. “This vote is their decision and their decision alone. They gave Express Scripts a chance last time – and the company failed them. Now it’s the workers’ turn. It’s time they had a voice. A ‘yes’ vote is a vote to protect themselves. A ‘yes’ vote is a vote to protect their families and the St. Louis community from multi-billion dollar companies that stomp on their workers’ right to seek justice and fairness at the workplace.”

“Congratulations to the pharmacy technicians, production clerks and warehouse workers at Express Scripts on the filing of your petition with the NLRB,” said IAM Midwest Territory General Vice President Philip J. Gruber. “This upcoming election is a direct result of a large majority of you having the courage to stand up and say enough is enough. An IAM contract is more than just a contract. It represents your voice and provides the economic security you and your family so rightfully deserve. That’s the ‘union difference’ shared by more than 14.5 million union members throughout the U.S.