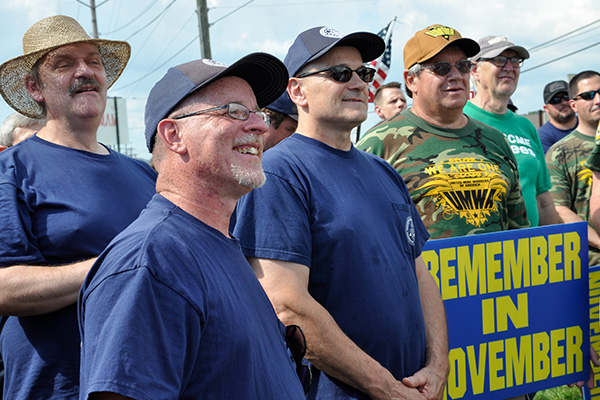 IAM Members of Local 818, District 54 employed at Tecnocap in Wheeling, WV ratified a new three year deal over the weekend, ending the 130 day strike. The strike came after members voted unanimously to reject the contract and to strike the employer.

“Congratulations go to our members, they realized that job security language is an important protection for working families, and they proudly held the line for 130 days,” said IAM District 54 President and Directing Business Representative T. Dean Wright, Jr. “Our negotiating committee did an outstanding job by standing firm, fighting for justice, respect and dignity on the job. We were able to return to work with our heads held high; with honor.”

The new accord features wage increases, and an increase of $0.30 into the pension plan. Wage increases in the first year of $1.18 cents per hour up to $1.94, and 0.75 for every member during the second, and third years. Negotiators were successful in obtaining improved vacation benefits, and just as important for these members, adding job security language for the life of the agreement for all members.

“The strength, solidarity, and resolve of this membership is extremely impressive” said IAM Eastern Territory General Vice President Jimmy Conigliaro Sr. “As the days got longer and hotter, they stood together and stayed strong through the hard fight. I was honored to stand shoulder to shoulder with these brothers and sisters on their picket line. My thanks, and congratulations go to the members of Local 818, DBR Wright and the negotiating committee for tremendous showing of solidarity.”

“We are so proud of the Fighting Machinists of IAM Local 818,” said International President Bob Martinez. “They not only showed a great deal of courage to unanimously vote to go out on strike for a fair contract, but also had the resiliency to stay out for over four months to get an agreement they deemed acceptable.”