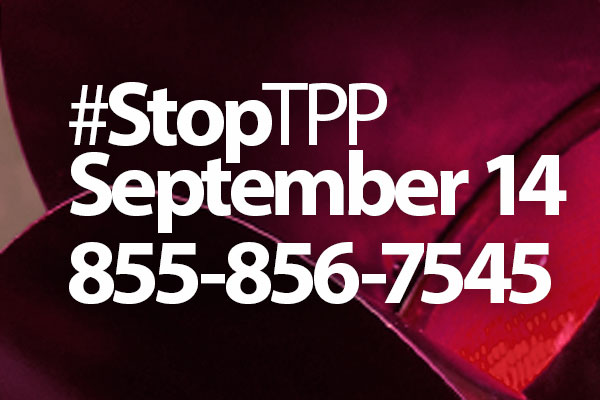 The IAM and dozens of organizations are working together to make Wednesday, September 14 a nationwide TPP Call-in Day—to get all of our representatives to publicly announce opposition to the TPP before the election.

Call your member of Congress at 1-855-856-7545 and urge him or her to issue a public statement opposing the corporate sponsored job-killing trade bill.

The TPP’s backers are twisting arms and calling in favors, trying to scrounge up enough congressional support to schedule a vote on the dangerous deal in the lame-duck session of Congress.

They know their only chance to get the TPP approved is to hold a vote after the election when representatives’ political accountability to constituents is at its absolute lowest. But we can foil that plan if we force members of Congress to take a public position before Election Day.

The TPP was hatched with 500 official U.S. trade advisors representing corporate interests involved in years of closed-door negotiations while the public, press and Congress were locked out. A core TPP provision grants thousands of corporations the right to sue local, state, and federal governments over critical workplace, food safety, and environmental regulations that corporations claim would impact profits.  These bogus suits would be tried before a panel of corporate lawyers that can award unlimited damages—all to be paid for by American taxpayers.

Call your member of Congress at 1-855-856-7545 and urge him or her to issue a public statement opposing the corporate sponsored job-killing trade bill.