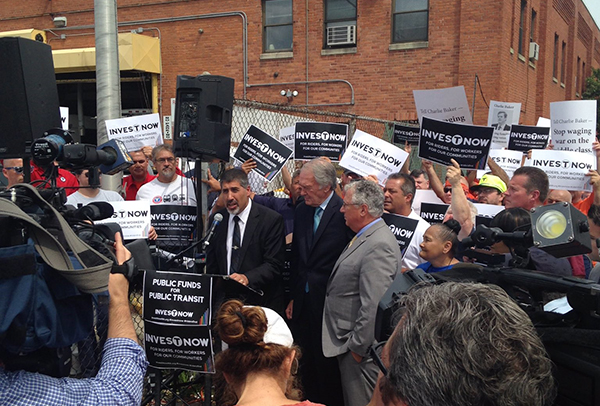 U.S. Sen. Ed Markey rallied with MBTA mechanics and other allies to stand against the privatization efforts by Gov. Charlie Baker and his transit administration.

The rally in Lynn comes on the heels of the for-profit companies sneaking into MBTA garages under the cloak of night between midnight and 3 a.m. earlier this week to survey the properties they will be bidding for control of.

“These for-profit corporations appearing under cloak of night to begin seizing control of the MBTA demonstrates the lack of transparency surrounding this scheme that is being forced upon taxpayers, riders, and worker,” said Mike Vartabedian, Business Representative of IAM Local 264. “The public deserves management at the MBTA that is open and transparent. MBTA mechanics rank as the best in the nation, but thus far the negotiations have remained one-sided with the workers offering $29 million in savings and hearing only silence from management.”

More than 450 mechanics, fuelers, and other skilled professionals united in IAM Local 264 proudly contribute to the operation of the MBTA and their communities every day.