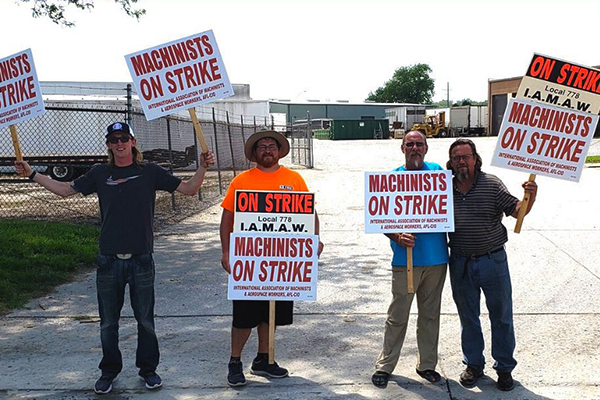 Solidarity and unity were on full display this week when IAM Local 778 members working at Highway Trailer Sales in Kansas City, MO settled their 12-day strike and returned to work with a contract which contained a 10 percent pay increase. The group of four tractor trailer mechanics voted unanimously to accept the new agreement.78

As the strike grew in numbers of days, so did the size of the picket line. Even though there were only four members on strike, the positive response from fellow union members, local labor unions, politicians and the community was a true display of how solidarity and support make a big impact.

BREAKING! Thanks to your solidarity, the striking workers at Highway Trailer Sales INC have won the raises & benefits they rightfully deserve!

Today's solidarity event on the picket line is canceled.

“The members at Highway Trailer Sales went on strike July 1. This group stood together every day to fight off the employer’s desire to sub-contract their work and cut their benefits and wages,” said Local 778 Business Representative Scott Brown. “This unit was successful in their fight and returned to work July 13 after accepting an offer with 100 percent approval. The amount of support from other labor unions, elected state and city representatives, retirees and other workers showing support on the strike line and making donations definitely played a major role in the owner getting back to the table. We’re happy to get this group back to work under a fair and acceptable contract that holds value to their labor and skill set.”

“These members held strong from day one of the strike and that is why they were successful in not taking concessions,” said Local 778 Directing Business Representative Joe Capra. “I want to thank the UAW, and all the other unions that came out in strong support during this strike. In addition, BR Scott Brown showed his leadership in turning this strike to a win for labor, and a special thank you to GLR Larry Young for his help throughout negotiations and the strike.”

“I couldn’t be more proud of this group for standing up and fighting for what they deserve,” said IAM Midwest Territory General Vice President Steve Galloway. “This group worked throughout the entire pandemic, making sure they could keep tractor trailers on the road. They sacrificed past raises to help their employer, and the time came for their employer to reciprocate with a fair contract. In addition to their strength and solidarity, the support they were shown by the labor community, political leaders and the greater Kansas City area has been truly inspiring. These members exemplify what it means to be Fighting Machinists.”