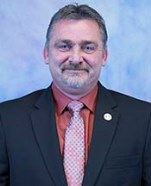 International President Tom Buffenbarger has appointed Shannon Stucker to serve as a Special Representative in the Midwest Territory, effective September 1, 2015.

Stucker first joined the IAM in 1993 as a machinist with Hub City Inc. in Aberdeen, SD. During his 17 years at the company, Stucker served in various positions within the IAM, including steward and shop committee chairman. In 2010 he was elected Directing Business Representative for IAM District 5.