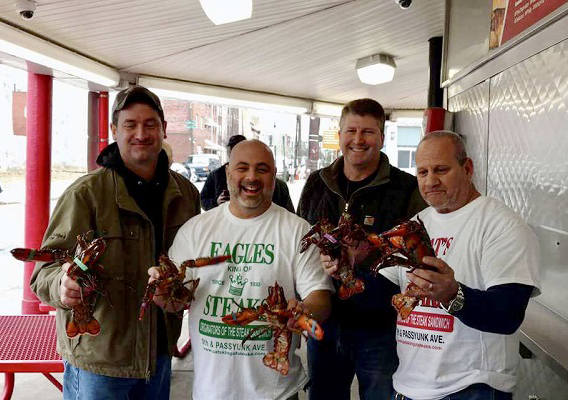 The Machinists Union’s own Lobster 207, the only union-based cooperative in the lobster industry, made good on a Super Bowl bet with Philadelphia’s Pat’s King of Steaks.

After the Eagles defeated the New England Patriots on Sunday, Lobster 207 made the eight-hour drive from Maine to Philadelphia to deliver 20 lbs. of live lobster to the legendary South Philly eatery.

The good folks at Pat’s were kind enough to send Lobster 207 home with cheesesteaks.

“We’ll be thinking about Tom Brady every time we’re taking a bite of that lobster,” said Frank Olivieri, who runs Pat’s King of Steaks.

Order your own fresh Maine Machinists Union lobster at Lobster207.com.

The King of the Cheese Steaks went surf and turf today with Team https://t.co/nnT1bsMsCS, Frank Olivieri made his own Maine Lobster Roll. I do believe we just made history at Pat’s Steaks! Thanks Frank and your crew this loss now does not sting so much @PatsSteaks First Class! pic.twitter.com/8ZbYu4Z0kY