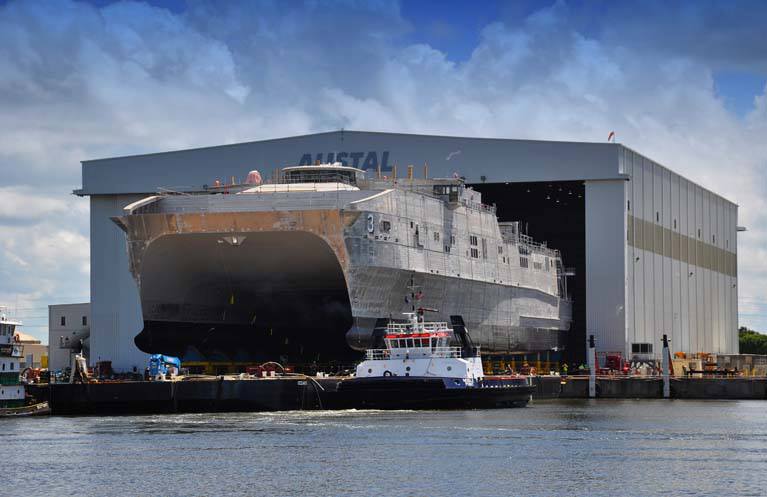 Workers at Austal Shipbuilding in Mobile, AL, fabricate and construct high-speed vessel systems, like the USNS Spearhead pictured above, for the U.S. Navy. After years of unfair working conditions, Austal workers have launched an organizing campaign to win union representation with the Mobile Metal Trades Council, of which the IAM is a part.

After years of enduring unfair works rules, disrespect and huge safety issues, workers at Austal Shipbuilding in Mobile, AL, have launched an organizing campaign to win union representation with the Mobile Metal Trades Council, of which the IAM is a part.

Austal USA, a Navy shipbuilding and repair facility, has a documented history of violating workers’ rights. As recently as April 2012, the company admitted to multiple violations of federal law because of their actions to prevent Mobile employees from exercising their right to unionize. Those actions include firings, surveillance and unlawful searches and seizures. In one particular incident, union representation authorization cards were stolen from employees, taken to Human Resources and copied. The company currently faces unfair labor practice charges.

Austal USA was recently awarded the Shipbuilders’ Council of America Award for Excellence in Safety for 2012, the fourth consecutive year the company has received the award. Yet, many employees have testified about injuries going unreported, and severely-injured workers being sent to hospitals in taxi cabs to avoid having to report the accidents as on-site injuries.

The Mobile Metal Trades Council consists of the IAM and five other craft unions, all with a long history of representing shipyard workers across the United States. It is a member of the AFL-CIO Metal Trades Department (MTD). Together, the unions are working to establish a union at Austal for the betterment of employee working conditions, benefits, and overall morale.

“Stepping onto the Austal yard is like stepping into a time warp,” said Ron Ault, MTD President. “If ever there were a location that needs a union it’s Austal. These employees are experiencing some of the worst favoritism, poor working conditions, and general arrogance of management I have ever seen.”

“Management is terrified of us having a voice,” said Austal worker Shannon Roberts. “We’re not going to be scared away this time. We deserve a real voice in our future. We’re Austal—and we can be the best. Our military deserves the best. We’re going to see that they get it.”

Austal doesn’t confine its disdain for unions to the Mobile shipyard; the Australian-based company has fought against unionization at its other facilities around the globe. The MTD has been in contact with Australian labor leaders throughout the planning stages of this campaign as they intend to make the campaign a global effort.

Show your support for workers at Austal by “liking” the “Change at Austal” Facebook page. Leave a message of solidarity and let them know you support them at this critical time.