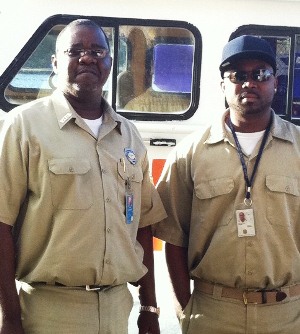 Two members of IAM Local 340 who are employed at the Port Authority Marine Division in the U.S. Virgin Islands, are being hailed as heroes for actions that saved the lives of several swimmers.

The swimmers had misjudged the distance of an incoming cruise ship, and were in position to be pulled into the ship’s propellers by the suction of the gigantic ship. Local 340 members Lowell Amosy and Derek Sylvester maneuvered their boat and were able to pick up the swimmers and take them to safety. Their quick thinking prevented a tragedy.

“IAM members do all kinds of jobs,” said IAM Southern Territory GVP Bob Martinez. “Brother Armory and Brother Sylvester uphold the great tradition of our union – service to the community as well as justice on the job. The quick thinking of these highly-trained and skilled workers saved lives, and on behalf of the IAM and the Southern Territory, I want to tell them how proud we are of them.”