Taking on the Race to the Bottom 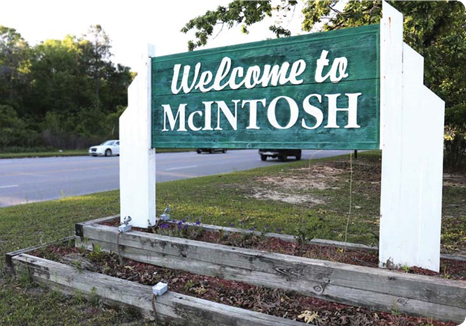 Ross Odom was outside his home in Washington County, AL, about a two-hour drive up U.S. Route 43 from Mobile.

“I was out in the yard, cutting grass, had a water hose slung over in the swimming pool, filling it up,” Odom recalls.

Odom works at a plant that produces Sucralose, a no-calorie sugar substitute better known as Splenda. He got a job there when the plant opened in 1999. It made for a good middle-class living; enough to support a family.

But in 2004, Odom and his coworkers—members of IAM Local 114—got some foreboding news: Tate & Lyle, a British company that owns the plant in McIntosh where Odom works, was going to build a Sucralose plant in Singapore.

By 2007, the Singapore plant was operating.

“At the time, there were a lot of concerns that came up about that,” said Odom. “It had been talked about, ‘Hey, this may happen.’ Of course, management assured us that it wasn’t gonna happen, that it was our sister plant.”

Singaporean workers came to McIntosh, pop. 229, to be trained by Odom and his coworkers. The McIntosh plant was the first in the world to produce Sucralose on an industrial scale. Tate & Lyle wanted the Singapore plant to do the same, but with closer access to Asian and European markets—and lower labor costs.

“Everything we learned here, they put in that new plant in Singapore,” said Odom.

By 2009, the McIntosh plant was running two months on, two months off. But the plan, at least as far as Odom and his coworkers knew, was to keep the plant operating.

That’s when he got a phone call.

Odom recalls his coworker on the other line: “Hey man, we’re shutting the plant down.”

“Yeah I know,” said Odom. “We’re supposed to shut down in two weeks, like we’ve been doing.”

“No, they’re closing the gate,” his coworker said.

Odom hung up the phone.

Odom’s coworker, Robbie Smith, was in the plant that day. He and the rest of the plant’s shop stewards were called into a meeting, where management told them the plant was indefinitely ceasing all production in McIntosh.

“Just the day before, I had started ordering material to build a new house,” said Smith. “I cancelled plenty of orders, needless to say.”

A productivity breakthrough discovered in McIntosh had allowed the company to produce a greater amount of Splenda from the same amount of raw ingredients. The process could be replicated in Singapore, at lower cost.

“For the foreseeable future, we will be producing all our sucralose from the newer, fourth generation manufacturing facility in Singapore,” a company spokesman said at the time.

“We actually trained the people that took our jobs,” said Odom.

Approximately 80 Machinists Union men and women at the plant were left looking for work. Their union contract entitled them to severance and closing provisions.

“Those people down in McIntosh do nothing but make the company look good,” IAM Business Representative Jim Cotter told the local newspaper in May 2009. “I am very disappointed they made this decision.”

Ross Odom and Robbie Smith were some of the lucky ones—they got jobs just a mile up the road at Huntsman Advanced Materials. Another coworker, Kelly Baxter, decided to go to nursing school.

They had no choice. It was time to move on from the factory they had gotten off the ground.

But while McIntosh adjusted to life without Tate & Lyle, the company was encountering problems in Singapore.

It wasn’t much of a surprise to some from the McIntosh plant.

“I don’t understand big business, I’ll be the first to tell you,” said Odom. “But I think they put so much effort in to shutting this plant down and shifting production to Singapore, by the time they realized it was a screw-up, it was too late to turn around.”

The plant in Singapore wasn’t meeting the surging demand for no-calorie sweeteners amid a growing trend of healthy eating.

Some Splenda customers raised concerns with Tate & Lyle about how the business decision was made, Odom said. Others didn’t like the product coming from Singapore—it was less powdery, making it harder to dissolve.

It was becoming clear that tax incentives and lower labor costs in Singapore weren’t replacing the reliable, skilled IAM workforce Tate & Lyle had in McIntosh.

But the company had spent $90 million closing the plant in McIntosh, and another $300 million opening its new plant in Singapore.

Tate & Lyle couldn’t possibly bring those jobs back to Alabama—or could it?

Cotter and Benji Sullivan, Directing Business Representative for IAM District 73, took steps to make sure Tate & Lyle recognized the IAM and its workers.

“I knew a lot of our folks would want to come back, and those jobs should belong to them,” said Sullivan. “I wasn’t going to let the company hire contractors and turn this into a low-wage plant. I made sure they recognized the IAM as soon as the doors opened again in McIntosh.”

The IAM kept Tate & Lyle honest on its return, and made sure the company kept seniority for returning employees.

“The union saved my job coming back,” said Smith.

Kelly Baxter, who had worked at the plant since it opened, was just beginning her nursing program when she got the call.

She jumped at the chance to return to the job she had held more than a decade.

On her first day back, she pulled into the parking lot and recognized the security guard—the same man who had that job at Tate & Lyle before the shutdown.

“He’s like ‘Come on up here, Kelly!’ He just buzzed me right on through,” said Baxter. “I was like ‘Wow, this is pretty cool.’ It’s like coming back home.”

But Baxter, and many Tate & Lyle workers who were at the plant before and after the shutdown, haven’t forgotten what happened. “Even if we’re here for another 20 years, we’re always going to be looking over our shoulder,” said Smith.

Odom and Smith, now President and Vice President, respectively, for Local 114, have a labor-management meeting every quarter. They push management for head counts in the plant, and keep their ears to the ground for any news like they heard several years back. Baxter is the Local’s Secretary-Treasurer.

In spring 2016, Tate & Lyle closed its plant in Singapore and consolidated all its global Sucralose production at the McIntosh plant. Around the same time, IAM members at the plant negotiated a four-year contract that included big improvements to their 401(k), as well as 3 percent raises annually for four years and $2,400 bonuses for the first two years of the deal. Improvements to grievance procedures and better language on transfers into job vacancies were also negotiated.

Local 114’s success story is rare, but not unprecedented.

IAM Local 2184, which represents workers at Pratt and Whitney in Lansing, MI, is also celebrating the return of work from Singapore. The plant currently employs approximately 500 workers, but could swell to over 1,100 in the next year. Just three years ago, only 140 people worked there.

Of course, the troubling trend of offshoring good middle-class jobs—never to return again—remains.

Take the Boeing Co., which employs more than 35,000 IAM members. Despite receiving billions in taxpayer dollars, the company has been slashing its North American workforce for decades. Work that used to be performed by IAM members will be done overseas for pennies on the dollar, including at a 737 finishing facility in China.

“Spineless politicians and greedy corporations are cutting our manufacturing industrial base down to the bone,” said Martinez, a former aircraft assembler at Lockheed Martin in Fort Worth, TX. “It makes us less safe, especially in the aerospace and defense industries where many of our members work. That’s besides the fact that it’s flat-out wrong to forget the people who have made these executives and shareholders rich.”

The IAM continues to fight for good jobs, and give working people the power they deserve when they are up against the whims of multi-national corporations.

McIntosh proved that working people can still win, but this time around, they aren’t taking anything for granted. “We’re always keeping one eye open,” said Baxter.