Tell Congress That Federal Contract Workers Deserve Back Pay, Too 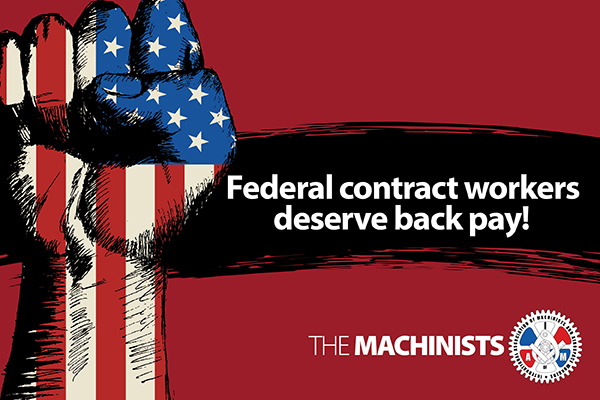 The Machinists Union strongly supports back pay for federal contract workers affected by the government shutdown.

The IAM is supporting the bipartisan Fairness for Federal Contractors Act of 2019, introduced by U.S. Rep. Donald Norcross (D-NJ), which would provide federal contractors with equal treatment as federal workers, meaning back pay, after the longest government shutdown in U.S. history. The bill is co-sponsored by U.S. Rep. Chris Smith (R-NJ).

“Federal workers and their families endured incredible hardship during this government shutdown at no fault of their own – and it’s clear they should not have to lose their paychecks,” said Norcross.

TAKE ACTION: Ask your member of Congress to co-sponsor the Fairness for Federal Contractors Act of 2019 (HR 824)

“The Machinists Union strongly urges Congress to provide back pay for federal contract workers,” said Martinez. “We wholeheartedly support the Fairness for Federal Contractors Act of 2019 introduced by U.S. Rep. Donald Norcross to make sure these workers receive the back pay they deserve.”

Read Martinez’s letter to members of Congress urging them to support the Fairness for Federal Contractors Act.