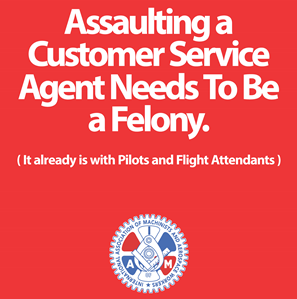 But when airport workers become the target of abuse, and occasionally violence, something needs to be done.

That’s why the IAM is demanding that Congress make it a felony to assault on-duty Customer Service Agents, the workers who help you check in and board your flight. Under current law, it is already a felony to assault a “flight crew” member, such as a Flight Attendant or Pilot.

“When airline workers are assaulted in the course of performing their duties, the safety of every individual at the airport is placed in immediate jeopardy,” IAM Transportation General Vice President Sito Pantoja wrote in a letter to Congress. “With record airline passenger levels, more innocent people are at risk each day.”

The House Transportation Committee recently included an amendment in the Federal Aviation Administration (FAA) reauthorization bill (H.R. 4441) making assault against Customer Service Agents a felony. Now we need your help getting it through the Senate and to President Obama’s desk to be signed into law.

Call now and let Congress know that IAM Customer Service Agents will not stand to be treated as second-class citizens. Your voice matters!