TELL CONGRESS: Vote “no” on USMCA 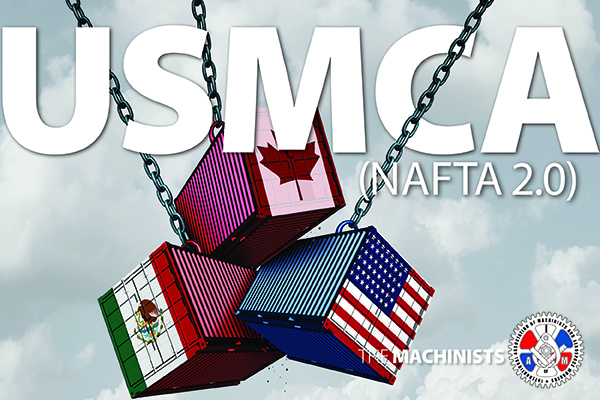 The IAM sent a letter to members of the U.S. House of Representatives urging a “no” vote on the United States-Mexico-Canada Agreement (USMCA), also known as NAFTA 2.0.

The IAM needs you to take action by asking your House member to oppose any vote on the proposed NAFTA pact.

TELL CONGRESS: Vote “no” on USMCA

NAFTA 2.0, as currently written, lacks adequate labor standards, enforcement of those standards and other urgently needed reforms that would curtail the outsourcing of aerospace and general manufacturing jobs..

“IAM members and their families and communities have been waiting over 25 years for a responsible trade deal that puts their interests ahead of those of corporations fleeing our shores,” said IAM International President Robert Martinez Jr. “They are still waiting.”

Tell your House member to oppose any vote on the proposed NAFTA pact until these issues are addressed.