Tell Pelosi to Stand Strong Against a Lame-Duck TPP Vote 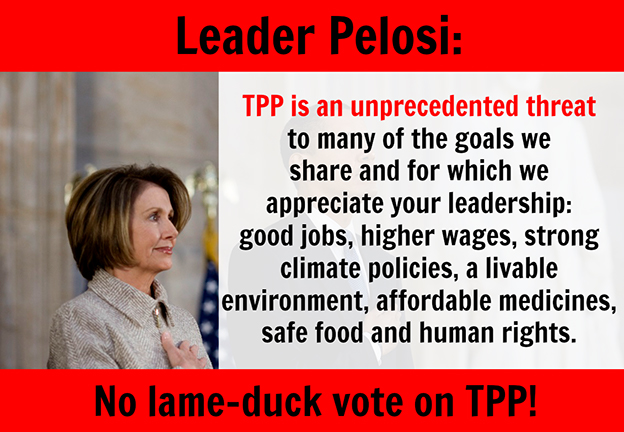 Thanks to massive public opposition, there’s little chance that the job-killing, planet-destroying Trans-Pacific Partnership (TPP) will be voted on before the November election.  Thanks to IAM members like you speaking out, being pro-TPP has become a huge political liability for any elected official.

So what are the corporations behind the TPP trying to do?  They want to schedule a TPP vote immediately after the election.

TPP proponents are now saying that the pact should be voted on during the post-election, “lame duck” session of Congress — that unique moment in the political calendar when Representatives who have retired or been voted out of office still hold their seats for a short period of time and political accountability to constituents is at its absolute lowest.

We can’t sit on our hands until November and see if this corporatist scheme plays out. If we are going to prevent the sneaky lame duck maneuver, we must act now.

Negotiated for years behind-closed-doors with the aid of hundreds of corporate advisors, while the public and press were shut out, the TPP would offshore good-paying U.S. jobs and drive down wages in the jobs that are left by pitting American workers into direct competition with highly-exploited workers making less than 65 cents an hour in Asian countries.

If that weren’t enough, the TPP would also provide oil, gas and mining corporations with new tools to challenge policies designed to tackle climate change, both at home and abroad.

Earlier this month, presidential candidates Hillary Clinton and Bernie Sanders both announced opposition to a lame duck vote on the TPP, which they have denounced as dangerous to our economy, public health and the environment.

But Democratic House Leader Nancy Pelosi has been surprisingly quiet on this issue. And what she says will have enormous influence on whether Democrats in the House of Representatives band together to ensure there are not enough votes to attempt a lame duck TPP vote.

TAKE ACTION: Ask Nancy Pelosi to join Hillary Clinton and Bernie Sanders in opposing the TPP both before and after the election.

We can’t afford this back-room deal that puts corporate interests ahead of human needs on jobs and wages, human rights, access to medicine, climate change and more.  Don’t let cynical lobbyists and politicians get their way by holding the TPP vote right after the election and hoping that, in the two years that follow before the next election, voters will have forgotten. Please write to Leader Pelosi now and urge her to help lead the fight against the TPP.