Tell your representative: Commit to vote no on NAFTA corporate power grab! 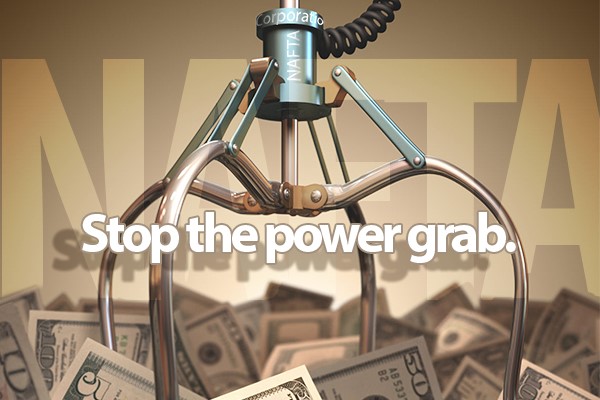 If you live in North America, we need you to make sure your government representative stops a corporate power grab in the new NAFTA renegotiations.

NAFTA gave vast new powers for corporations that make it easier to offshore jobs and attack the environmental and health laws on which we all rely.

Deals like NAFTA give multinational corporations the power to sue governments in front of a tribunal of three corporate lawyers. These lawyers can order taxpayers to pay the corporations unlimited sums of money, including for the loss of expected future profits.

The multinational corporations only need to convince the lawyers that a law protecting public health, digital rights or the environment violates their special NAFTA rights. The corporate lawyers’ decisions are not subject to appeal.

If You Live In the U.S., Canada or Mexico:
Add your name to tell your government representative (in the U.S., your member of Congress) to commit to oppose any North American Free Trade Agreement (NAFTA) renegotiation or any other agreement that includes Investor-State Dispute Settlement (ISDS).