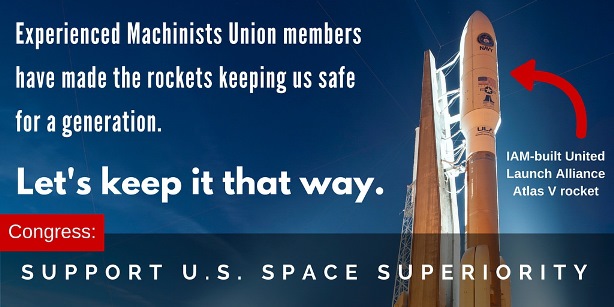 The world-class U.S. space program, and the IAM jobs helping to keep it that way, are at risk.

Supporters of a non-union and unproven launch company, SpaceX, are trying to prevent United Launch Alliance (ULA) from buying the rockets it needs to keep supporting U.S. space and defense projects. ULA, which employs nearly 1,000 IAM members, has completed more than 100 launches, including many critical national security launches, with a 100 percent mission success rate—the only U.S. launch provider to do so.

The IAM is urging Senators to support a bipartisan amendment authorizing the use of up to 18 highly reliable RD-180 rocket engines in the Defense Department’s Evolved Expendable Launch Vehicle (EELV) program. The House in April approved a similar amendment in its defense spending bill.

In a letter sent to all U.S. Senators, IAM International President Bob Martinez explained that a new American-made rocket engine is projected to become operational in 2019, but in the meantime, not using the Russian-made RD-180 will drive up costs, weaken our efforts in space and put Americans out of work.

“Our members and companies like United Launch Alliance epitomize the fundamental American values of hard work and decency,” said Martinez. “Now the Senate needs to step up and ensure that they have all the tools, including the RD-180, to effectively perform their critical mission.”

Tell your U.S. Senators to support the bipartisan Gardner-Nelson amendment to the 2017 NDAA, authorizing the use of up to 18 highly reliable RD-180 rocket engines in the Department of Defense’s EELV program.