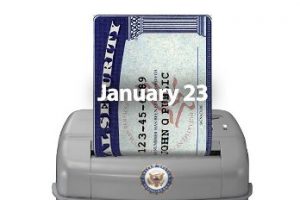 On Monday, January 23 tell President Trump to stand up to Congress and keep his campaign promise not to cut Social Security by calling the White House on the Alliance for Retired Americans National Call-in Day.

Sign up for the Call the White House Day.

Social Security and Medicare are under attack now more than ever. Many of our elected officials in Congress are seeking “entitlement reform.”

What that means to working people is they are coming after the benefits we have been paying into our entire lives. These benefits aren’t entitlements, they’ve been earned.

President Trump campaigned and catered to the working class, promising to not go after Social Security and Medicare. Call the White House on January 23 and tell him to keep that promise.

Sign up for the Call the White House Day.