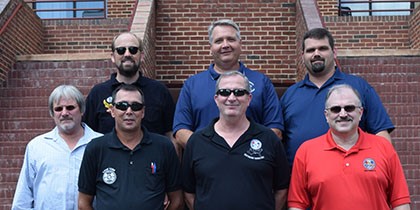 The Negotiating Committee for Clarksville, TN Local 1296, along with staff members from District 711, participated in the Negotiations Preparation for Bargaining Committees program at the William W. Winpisinger Center in Hollywood, MD.

Recognizing that this promises to be a difficult round of negotiations and drawing from bargaining history, the Committee strategized to map a new direction for relations with the company, put better language in the contract and build solidarity in the bargaining unit.

“The week at the Winpisinger Center was challenging and busy for the Local 1296 Bargaining Committee,” said District 711 Business Representative Keith McFarland. “They came with a goal to prepare for, negotiate, and ratify a collective bargaining agreement with improvements in wages, health care costs, increased job security, and retirement options. The members of Local 1296 will be well represented because of their commitment to hard work and preparation for the upcoming negotiations.”