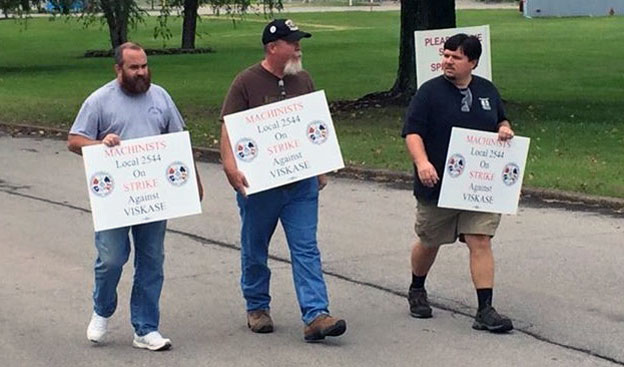 One hundred and eighty-nine members of IAM Local 2544 in Loudon, TN voted overwhelmingly to reject a contract proposal from Viskase, Inc. and commence a strike Wednesday, September 30.

The IAM members at Viskase voted by more than two-thirds to reject the company’s five-year proposal, which included deep cuts to current health care and retirement benefits while tripling a tax on workers who smoke.

“This is a successful and profitable company,” said IAM District 711 Directing Business Representative Rickey Wallace. “They are demanding cuts that would add significant costs to our members’ family budgets.

The company’s proposal includes a so-called “consumer-driven” health-care plan, which would include a $1,800 deductible for single workers, a $3,600 deductible for families, as well as cuts in short-term disability and workers comp pay. “This all but guarantees bankruptcy for members who get sick,” said Wallace.

The IAM is also filing Unfair Labor Practice Charges against Viskase with the National Labor Relations Board for surface bargaining and refusing to bargain in good faith.

“The company would go over 36 hours at a time without meeting with our committee,” said Wallace. “Last Friday, we were planning to meet with the company again at 8 p.m., but the company at the last minute sent a message through the Federal Mediator that they were leaving for the weekend, and wouldn’t be back before Monday. These aren’t the actions of a company bargaining in good faith.”